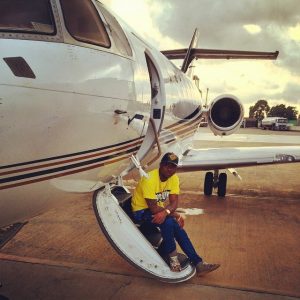 Nigerian singer Davido has shared documents showing off the proof his newly bought private jet. The singer who took to Instagram to share photos of the document bragged about being one of the youngest Nigerians to own a jet. On his Instagram story, Davido also revealed that the jet would arrive in two weeks.

The excited singer also showed off photos of the jet. The excited father of two who has released multiple hit songs stated that he is one of the youngest to own a private jet.

He said: “Air OBO soon land. Youngest Nigga with a jet. My baby lands in two weeks.” Davido who recently bought a Porsche for his girlfriend Chioma on her birthday, seems to be living the expensive life.

Our source gathered that the singer bought the jet for $27,000,000, which is 9,720,000,000 in naira. A new Bombardier Challenger 605 sells for approximately $27m and the used 605s are currently selling for about $15m. It is no surprise that the IF singer is wealthy enough to buy private jet worth over nine billion naira. Aside the fact that he comes from a wealthy family, Davido has also made a name for himself in the music industry by releasing several hit songs.

He recently became the brand ambassador for a popular mobile phone brand. A Nigerian Twitter user shared a post confirming that the singer bought a private jet.