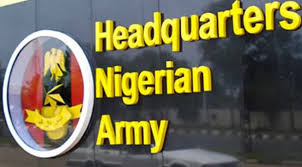 (SBCHROs, SE Nigeria: 4th April 2019)-It is no longer news that death of professionalism and ethical soldiering in the present Nigerian Army have risen to an apogee and are heading to the point of irreversibility. What is left of corporate integrity, professionalism and secular neutrality of the NA was recently pronounced dead and buried during the controversially rescheduled presidential and governorship polls held in February and March 2019.

During the controversial polls as contained in several credible local and international reports including that of INEC, soldiers of the Nigerian Army were evidentially found to engage in sundry electoral fraud and violence; to the extent that but for dastardly roles of the Nigerian Army, some victors in the polls including President-Elect, Governors-Elect and Lawmakers-Elect who brutally subverted the sacred electoral wishes of the Nigerian electorates to emerge declared “winners” through the barrel of gun should not have emerged. Where the Army violence, brutality and electoral subversion were successfully resisted by the electorates such as in Rivers, death of scores and injuring of others was the order of the day.

Despite these soldiering gross misconducts, the Nigerian Army has remained shameless and boastful; to the extent that it still goes about pouring accolades to itself and its personnel. The NA was so unrepentant it still went about after the reported conduct atrocities, claiming to be “professional” with intactness of integrity. Yet the same NA has sundry war crimes and crimes against humanity hanging around its neck; all committed from August 2015 till date. During the 2019 controversial polls, the NA directly and directly caused the death of over 50 Nigerians including Rivers State Government officially reported death of 35 persons. Till date, the NA and its culpable personnel are on the prowl, with none arrested and put on trial.

The NA and allied others had before the controversial polls of 2019 engaged in the massacre or mass killing of the following classes of innocent and defenseless Nigerian citizens: (a) 480 unarmed Christian citizens (crimes against humanity) of Eastern Nigeria (committed in August 2015-September 2017), (b) 236 Christian IDPs in Kale-Balge in Borno State (war crimes: Jan 2017), (c) 50 rural Christians in Numan, Adamawa State (war crimes: December 2017), (d) 240 civilian detainees (starvation and torture-war crime) at Giwa Military Barracks in Borno State (committed in 2016), (e) 1,130 members of Shiite Muslim sect in Kaduna State (crimes against humanity: December 2015 and parts of 2016), (f) 159 children in Northeast Nigeria (war crimes: 2017), (g) 60 members of Shiite Muslims (crimes against humanity: September and October 2018) and (h) 50 electoral activists (electoral violence and premeditated murders: Feb and March 2019); all totaling 2,405 civilian deaths. Credit: Int’l Society for Civil Liberties & the Rule of Law. The list is just to mention but a few.

As if these were not enough, the NA is still going ahead, radicalizing and Islamizing the Nigerian Army by engaging in massive recruitment of hundreds of “repented” Boko Haram terrorists including its recently announced “enlistment and graduation” of 152 Boko Haram terrorists Gombe State. The NA had maintained such illegal, unconstitutional, un-secular, bias and unethical practice since 2016 leading to unlawful and unethical enrollment of hundreds, if not thousands of the so called “Ex Civilian JTF” and “repented Boko Haram fighters” into the NA; contrary to clearly laid down rules governing the Nigerian Army, its ethics and secular status.

In re-organizing the Nigerian Army, direly and urgently needed to restore the confidence of all Nigerians and repositioning of same on the path of modern military and its doctrines, all the lopsided recruitments particularly the illegal enrolment of insurgents and the so called “Civilian JTF members” must be looked into and reversed with those recruited under such illegal and unethical circumstances weeded out of the NA.

The NA must also be returned to its former path of professionalism, secularity and ethical soldiering. As an interim measure, Lt Gen Tukur Yusuf Buratai and the Chief of Defense Staff, who have remained in their positions since July 2015; with their office tenure beclouded by incompetence and mountainous conduct atrocities, must be weeded out; to be followed by massive retirement of all the serving Major Gens (including GOCs) and Brigade Commanders, headed by Brig Gens. The exercise should be carried out within the confines of Doctrine of Necessityor be treated as issue of urgent national importance.

There shall also be massive retirement of present crop of senior Army officers from the rank of Major Gen and where in any senior ranking category such as Brig Gens or Colonels, it is found that such senior ranking is grossly lopsided or occupied or dominated by officers of Hausa-Fulani Muslim, or Southwest Christian/Muslim, or South-south/Southeast Christian, or Middle Belt Christian backgrounds, etc; there shall be mass retirement of same and adequate payment of compensation to the retirees so as to pave way for balancing the imbalances. This special exercise must be extended to other branches of the Nigerian Armed Forces, the Police and Paramilitaries.

The new Nigerian Army of our expectation must not be “Nigerian Army of Islamic logo or symbol” but that with its logo or symbol written in Nigeria’s lingua franca. It must also not be Nigerian Army of ethnic cleansers and religious zealots or Nigerian Army of ballot box snatchers, fake election result writers/adulterators, hostage holders of election chief returning officers, preventers and intimidators of independent voters, controllers of peaceful assemblers with live/deadly bullets and committers of war crimes and crimes against humanity, etc.


We boldly and patriotically take this advocacy position with attendant call bearing in mind that the present central Government of Nigeria is widely criticized as cabal led with its President not office coordinated and in charge including not listening to voices of the social change and its agents; yet it can never stop us from saying or doing what is right in our priceless quest for better society and advancement of democracy, human rights and due process in Nigeria or any part thereof.

Bearing in mind that Nigeria is not an island of its own but a strong reliant on comity of civilized and advanced nations for survival, growth and development; we are by this informed position, placing the ball in the court of members of the international democracies and UN to put sustained pressure on the present central Government of Nigeria to get things done right in the country particularly the reorganization of Army and allied others.

With over $1billion in humanitarian, military and development aids from western democracies alone annually and billions of dollars worth of arms trade and other non military trades with Nigeria on annual basis, we have no doubt in our mind that the pressure under demand shall prevail if applied fully.

That is to say that further aids, military trade and others with Nigeria should be tied to holistic reorganization of the Nigerian Army and allied others and bringing to book of all the perpetrators of the conduct atrocities highlighted above. The int’l democracies are further urged to add visa ban and property seizure and international border arrest and prosecution of the named perpetrators including Lt Gen Tukur Yusuf Buratai, the COAS.

Wole Soyinka Says His Home Is Under Invasion Of Herdsmen

EFCC To Probe Amosun, Yari, Okorocha, Ahmed After May 29

41 thoughts on “Death Of Professionalism & Ethical Soldiering In The Nigerian Army: Probe & Reforms Commissions A Must Step”