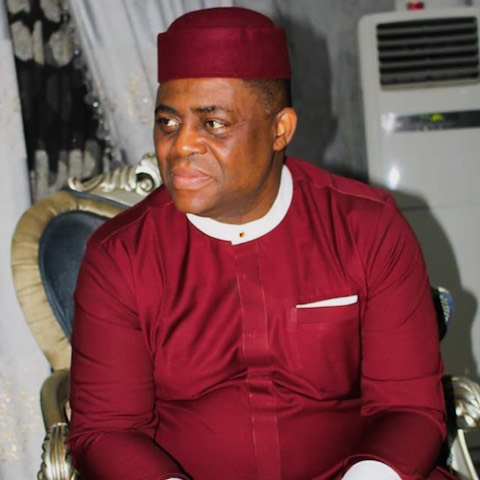 Femi Fani-Kayode, former minister of Aviation has narrated how activist, Adeyanju Deji was beaten by alleged President Muhammadu Buhari supporters during protest on Monday in Abuja.

It was learnt that Adeyanju alongside some other protesters were attacked while on their way to the Human Rights commission to summit a letter demanding the release of the Convener of ‘ RevolutionNow’, Omoyele Sowore.

Fani-Kayode giving details on the incident said, ‘Deji was attacked by a 150-strong crowd of young, wild drug-crazed almajiris shouting, “sai Baba” which left him unconscious.

He further warned President Muhammadu Buhari of the consequences of the happening under his adminstration, adding that power is transient.

On his Twitter page, the former minister wrote: “I spoke to Adeyanju Deji and I can confirm to you that he was badly beaten until he was unconcious. He barely escaped with his life.

“As he was about to submit his letter on Yele Sowore at the Human Rights Commission in Abuja he was attacked by a 150-strong crowd of young, wild drug-crazed almajiris shouting “sai Baba” whilst the police and DSS stood by and did nothing to help.

“They were carrying placards with Buhari’s face on it and they kept on chanting his name. Hear this: beating up opposition members changes nothing. It only strengthens our hand and our resolve and swells our ranks.

“Finally remember that you will not be in power forever and one day you will be called to account for your wickedness, brutality and tyranny.”