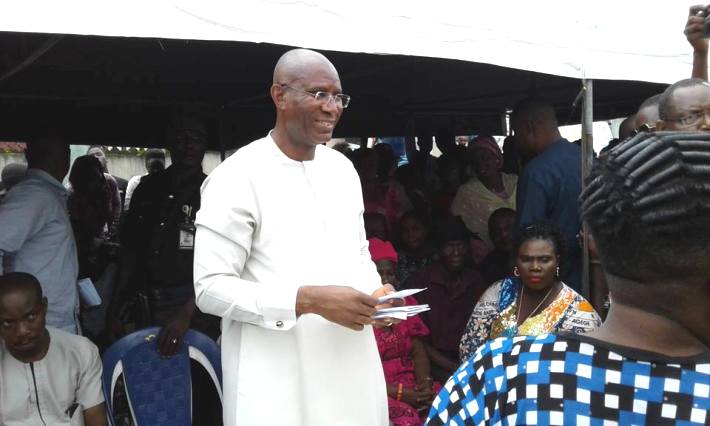 The second term push of the incumbent governor of Delta State, Ifeanyi Okowa, would suffer huge setbacks if the current move by the All Progressives Congress (APC) Senator representing Delta Central in the National Assembly (NASS), Senator Ovie Omo-Agege, is put into action.

The Senator who doled out N7.1 million Saturday at Jeddo, Ughoton, Ugbokodo, Adeje and Orerokpe markets all in Okpe Local Government Area as empowerment to 355 petty traders also thanked the women for voting for him in the 2015 election.

Speaking to the women who came out in their large number to receive him, he charged them to vote for APC at all level in order to rescue Delta state from total collapse as the Okowa-led Peoples Democratic Party (PDP) government has allegedly battered the little gains of the past administrations by his poor governance.

According to him, a�?to remove Okowa, you must vote for Chief Great Ogboru, as governor in 2019 that is our mission, because Okowa has destroyed Delta state, the little progress we made in the past have been destroyed by him. He is busy looting the state resources, with little or nothing left for developmenta�?, he alleged.

He continued: a�?this must stop and that is why you must vote all APC candidates, vote Ogboru, for governor, Omo-Agege for senate and President Mohammadu Buhari againa�?.

While urging women and Deltans to register and get their votersa�� card, Omo-Agege assured that unlike in the past where PDP in the state rig themselves into power, the APC-led federal would ensure that PDP rigging system where they purportedly compromise security agencies and the Independent National Electoral Commission (INEC) is checked in 2019.

Omo-Agege added that anyone who attempts to steal APC’s votes in 2019 would be made to vomit it, like he did to the PDP candidate, Chief Ighoyota Amori, who he said allegedly stole his mandate in 2015 election, noted that, a�?APC vote is like a chameleon meat, whoever swallows it, will vomit ita�?.

a�?So, come out and vote for APC in 2019 because your vote will count. Vote the APC for the House of Assembly and House of Reps, for senate and governor, vote Omo-Agege and Ogboru, while you should vote Buhari for president, because we need federal support to stop PDP from rigging in 2019,a�? he added.