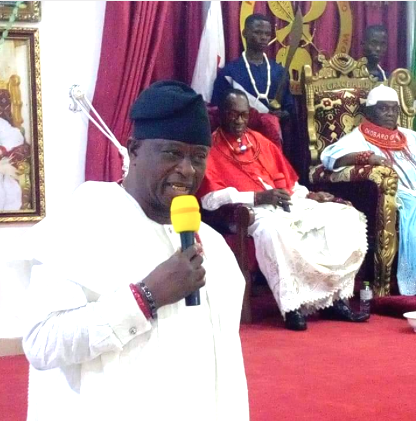 Olorogun (Barr.) Gbagi, the former Minister of Education who led Gbagi Solidarity Movement to seek the Royal blessings over his intention to contest 2023 gubernatorial election, said he is back from sabbatical leave to join his kinsmen at the Palace of the Okobaro of Ughievwen Kingdom.

The Ame of Ughievwen Kingdom, Olorogun Gbagi disclosed that he came to seek the Royal hands of the Ughievwen monarch in prayer, his partnership on the basis of honesty, sincerity, truthfulness and character to be in government house, Asaba, come 2023 as a governor of the state.

The former Minister of Education who said he has decided to meet with his traditional King, said no matter what, the teeth and tongue are still close friends, saying, “we live together and we as people, we must progress together to bring development to our land”.

Olorogun Gbagi who acknowledged the tremendous works of his friend, Dr Ifeanyi Okowa in repositioning the state for Stronger Delta, said there is still huge vacuum where he would use his business’ experience to turn around the development of the state when elected as the governor, come 2023.

Responding, HRM, Matthew Ediri, Owahwa II, Okobaro of Ughievwen Kingdom offering Royal prayer to Olorogun (Barr.) Kenneth Omemevwa Gbagi to succeed on his quest to govern Delta State, come 2023, the Ughievwen monarch reiterated that what the duo have agreed and that is the truth that Ughievwen Kingdom remains an indivisible entity.