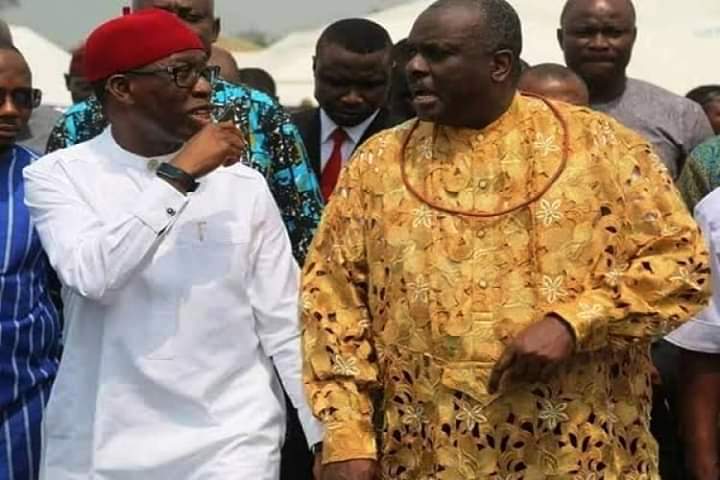 We are not into politics at all. We are just saying what other people are afraid to say-Eazy-E

One thing is certain and that is the 2023 gubernatorial elections that will take place in Delta State will be bloody. Sadly enough, only the fools among them who allow themselves to be used as political thugs and slaves will go to the grave and still go to hell.

The state Governor, Ifeanyi Okowa is new in his second term and the struggle to replace him is already ongoing. Do these politicians not have conscience? Do they not think about the people they want to lead? Is grabbing of power all that they sleep, dream and wake?

I hate to imagine Urhobos who should naturally sit calm and decide the affairs of Delta State as the majority group already campaigning for 2023 when the current governor is just beginning a new tenure in office. Instead of campaigning, they should be helping Okowa to end well and secure his help towards the aspiration of their dream.

One thing is certain, no matter how much they plan, the next Peoples Democratic Party (PDP) governorship candidate will need the influence of Okowa to emerge and not the interest of an ethnic group like the Urhobos who are divided among themselves.

What is it with holding all these meetings and begging other ethnic groups to support Urhobo turn to be governor? What is it with PDP and early tussle for power? Don’t they have any business in life apart from plotting how to always enter Dennis Osadebey House? What even makes them feel that it is the birthright of their party to stay in the government house? Did the founder of this state plant their placenta there?

The All Progressive Congress (APC) leaders have never held one meeting concerning 2023 gubernatorial elections despite holding the enviable position of the number five citizen in Nigeria, in the person of Senator Ovie Omo-Agege and Benard Okumagba as the Managing Director of the Niger Delta Development Commission (NDDC). Instead, they have focused on delivering on the promises they made to their people. Just like those in PDP already thinking of 2023, Omo-Agege is also an Urhobo, who should also be holding meetings on how to wrestle power in the next election but he is not.

Governor Okowa should be allowed to focus on governance and not politics. The daily agitations by the Urhobos mounts pressure on him. It is making him beginning to think of a possible successor instead of being boxed to a corner. There are many eminent Urhobos qualified to be governor but this is not time to begin unnecessary campaign that is capable of derailing the governor from the Stronger Delta dream he promised us.

Let it not be said that the reason he appointed the Urhobos into strategic positions is to use it to steal money and muscle their way into power as we see with their every minute meetings in Oghara. It is even more annoying when they gather only politicians of Urhobo extraction without industrialists, academicians, top journalists, entrepreneurs and those who have made mark in their profession.

Let it be noted that none of them will decide the fate of the Urhobo nation in 2023. The era of some bunch of political landlords and political buccaneers deciding for Urhobo ended in 2015. The days when they sit in the comfort of their house as former and serving government officials to chose who will carry the Urhobo guber flag and tell us to follow the way has ended. If it will not be an all embracing affairif not, we will all spoil the show and go our separate ways.

After all, there is no law that says Urhobo must produce a governor in 2023. There is no agreement that says governorship is rotational. That we allowed it to happen in time past does not make it right, just or lawful. The Ijaws have a right to become the governor in 2023. The Isokos have every right to contest in 2023 and if they win, so be it. I refuse to allow a group of persons who feel they hold the key to Urhobo political destiny decided for me as if I am dumb or stupid. If they fail to realize that in this 2023 project, we are all involved as a tribe, a people and a nation, and then we can all go our separate ways by supporting opposing candidates.

It is their lack of carrying people along that made them lose the Delta Central Senatorial election to APC. What they failed to do, Omo-Agege did, by involving all of us along the way, despite how highly placed he was as a Senator, he still reached out to friends and political godsons who have access to other politicians and Senators to speak to them to support his Senatorial and Deputy Senate President ambition. Agege knows the power of involving critical persons in his political journey. He knows the psychological effect in picking his phone to say “what do you think about this…. Talk to so and so person”. This is what the PDP lacks and they have started again in their Oghara Mecca house. E no go work this time.

The era of use and dump will not be tolerated by anybody. No one will be fooled this time around. The fooling ended with Okowa completing his tenure. We will all sit down at the table and collectively decide or end this political marriage of slavery, where after delivering their candidates as Governor, Senators, Reps and House of Assembly members, they will sit back and decide who and who gets appointments and contracts while we are left stranded with nothing to show for it.

Is Kenneth Gbagi really serious about contesting the 2023 governorship election? I have never seen a better political joker than him. How can a lawless citizen aspire to govern a state like Delta State? He lacks every moral right to vie for the coveted position that is meant for the meek and lowly. In his own village, he did not bring any development as a Minister nor attracted any dividends of democracy.

Let’s talk about Gbagi and why he should not even campaign.

Few years ago, he built an illegal hotel in Effurun under a high tension wire. The State Government under former Governor Emmanuel Uduaghan warned against such building directly under such deadly condition. Uduaghan directed that the hotel should be shutdown even when Gbagi stubbornly built it. When it was obvious that Uduaghan was serious on demolishing it if it was not shut, he closed it. For political reasons, it was not demolished but it was closed and remained dilapidated for years.

Shockingly, as soon as Uduaghan left office, Deltans were shocked to see the same land under the high tension wire housing a large plaza built by the same Gbagi facing his Golden Tulip Hotel. The same plaza that has no Certificate of Occupancy, capable of causing multiple death and destruction of property was commissioned by Okowa in 2015. It is likely certain that Okowa is not aware that the land has no building approval because of its location and that the plaza was built on top of Shell oil pipeline with the case in court between both parties. If the land on top which the plaza is built has CofO, those who issued it should be sacked if they are still in civil service. Fortunately, only a Governor can issue such document and I can beat my chest and $200,000 bet with Gbagi that Uduaghan never did, either in person or proxy.

Is such a person who disobeyed an executive order fit to be a governor? If he cannot obey the order of a governor, who will obey his own? If he cannot value the live of Deltans as an unelected citizen, how will he value it when he has the power to do and undo as a governor?

He should stop forthwith his campaign and begin the demolishing of that deathtrap called a plaza and make amend to God his creator. The money used in the campaign should be used in atoning for his sins by shredding his cloth into sack and pour ashes on his head and donate the money to orphanage home. When his sins have been forgiven which I must confirm, he can then decide to contest after 2023 and he if wins, to God be the glory.

For now, I do not know of any that will mount the throne of Dennis Osadebey House, but I know for sure that Kennth Gbagi will NOT be governor in 2023.

These little things matter…
Fejiro Oliver, an investigative journalist can be reached on +2348022050733 (SMS ONLY). He tweets with @fejirooliver86 and IG Handle @elahuva

Benue Killings: What Simon Lalong Did Not Say

IS MUHAMMADU BUHARI DEAD OR ALIVE?

11 thoughts on “Delta 2023: Oghara Plot To Install The Next Governor Will Fail!”