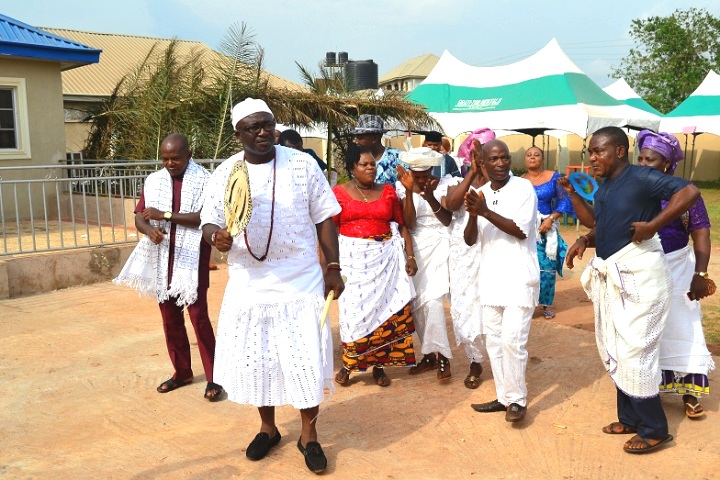 Delta State Commissioner for Information, Ogbueshi Patrick Ukah, has thanked the Landlords' Association of Pat Okonkwo axis (Okotomi Layout) Okpanam, Oshimili North Local Government Area, saying that he is indeed happy with the positive feedback he has received from them on the achievements of the Governor Okowa led administration.

The Commissioner, who stated this when they paid him a courtesy visit at his country home in Okpanam, assured them of more developments to be seen in the community and its environs as the state government has a listening ear and is attentive to the needs of the people.

Mr. Tunde Obado Oliogu, who led the delegates, described Ogbueshi Ukah as an astute and pragmatic politician, who has through his official position attracted developments to their community.

The association pledged their unalloyed support for the Commissioner for Information's political goals while declaring that they would mobilise en masse to return the State Governor, Senator Dr. Ifeanyi Okowa, in 2019.

Earlier, the Yoruba Community living in Okpanam, Hairdressers Association, Artisans' Association of Okpanam and Oshimili North Traditional Rulers, had paid visits to the Commissioner in appreciation of his good works in the Okpanam community and in Delta State and pledged their allegiance to the Governor Okowa led administration.

Meanwhile, Ukah, has said that the possession of the Permanent Voters Cards (PVCs) is very key in ensuring that the state Governor, Senator Dr. Ifeanyi Okowa, is re-elected in 2019.

Ogbueshi Ukah stated this in his remarks during a meeting of the Peoples' Democratic Party (PDP) Ward 9, Oshimili North Local Government Area in Okpanam.

He therefore called on those who have not collected their PVCs to do so and those that have not registered to go and register as soon as the Independent National Electoral Commission (INEC) reopens the exercise so they can be part of the people who will vote and return the Governor to office in 2019.

The Information Commissioner charged members of the Ward to go back to their various places of abode and join the crusade of spreading the good news of the accomplishments of the Governor and the need to re-elect him.

Ogbueshi Ukah told the people that the numerous developmental projects scattered around the state is a manifestation of the level of prudence Dr. Okowa is deploying in managing the resources of the state just as 20 persons received financial empowerment during the meeting.

9 thoughts on “Delta Commissioner Assures On More Developments In Okpanam Axis, Harps On Possession Of PVCs”