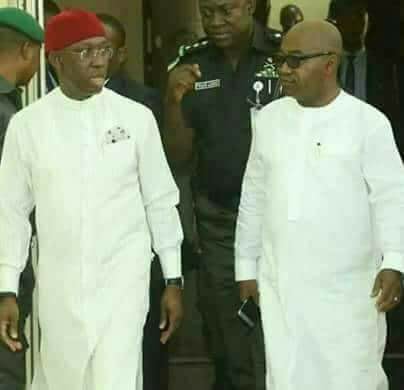 Amidst wanton destruction, burning down of houses and alleged killing of a police officer in Ebendo Obodo-Eti community, Ndokwa West local government area of Delta State, the Ifeanyi Okowa-led government has declared that his administration a�?placed high premium on ensuring enduring peace and security in the statea�?.

The community where oil was discovered recently allegedly went off guard when some government appointees allegedly went through the back door to negotiate with the oil company.

It was also gathered that same political appointees allegedly sold transformers belonging to the community under disguise of repair but was tracked down around Oghara and Benin area.

Briefing journalists Monday during the 2018 Ministerial Press Briefing at the Ministry of Information, the Secretary to the State Government (SSG), Festus Ovie Agas, said the state government is a�?mediating in many crises that had undermined peaceful co-existence among many communitiesa�?.

According to him, a�?peace initiatives have been implemented to resolve hosts communities and oil companiesa�� disputes. In this wise, it may also be noted that the mandate of the 41 member Peace Building and Advisory Council has been modified to include settlement of disputes among communitiesa�?.