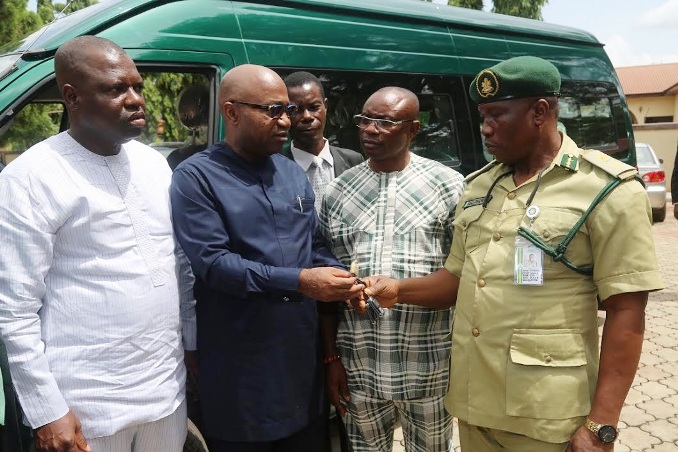 To ensure there is a speed in the administration of criminal justice in Delta State, the state Governor, Senator Dr. Ifeanyi Okowa has donated two 18-seater buses to the Nigerian Prisons Service.

Presenting the buses Monday in Asaba, Governor Okowa decried the congestion of Prisons in the country.

According to him, “it should be recalled that Delta State played host to the Nigeria Bar Association’s (NBA) conference on criminal justice reform recently and during the conference, Prison was identified as one of the critical sectors of this reform, especially the transportation of awaiting trial inmates to the court.

“Stakeholders, especially state governments were asked to help ameliorate these challenges, and it is on that note that the Delta State government is donating these buses to take prison inmates who are awaiting trial to the court,” the Governor stated.

He continued, “As good partners in progress, the Delta State government is presenting these vehicles to speed up the delivery of justice in the state.”

The Governor who was represented by the Secretary to the Delta State Government, Rt. Hon. Festus Ovie-Agas, expressed confidence that in Delta State, things should be done right and no one should suffer as a result of injustice.

Comptroller of Prisons, Delta State Command, Mr Sam Iyakoriegha, commende Governor Okowa’s administration for providing the buses to the Nigerian Prisons Services stating, “this is a dream come true, we are very grateful to the Delta State government and all those who made this to be possible.”

The event was witnessed by the Commissioner for Transport, Hon. Vincent Uduaghan, his Government House counterpart, Hon. Henry Sakpra, Permanent Secretary Government House and Protocols, Mr Edwin Ogidi-Gbegbaje, among others.

Information That Only 15 Chibok Girls In Custody Of Boko Haram Are Alive Not Available To Us, Says Nigerian Govt.