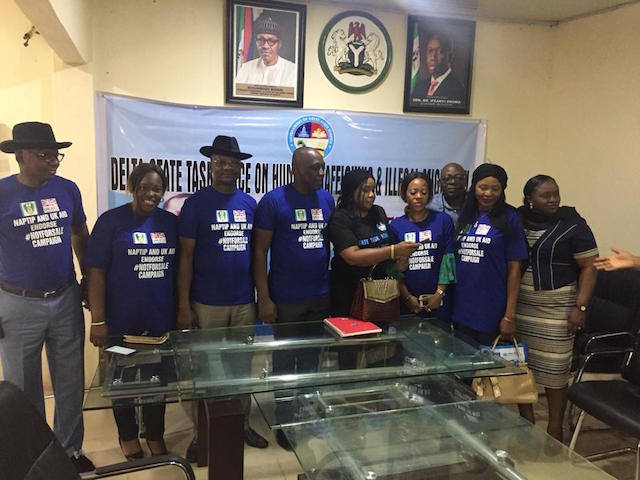 As the menace of child and human trafficking continue unabated, the Delta state government said it would deploy all arsenals at its disposal to battle persons involved in the dirty business.

Addressing a press conference Wednesday at the Ministry of Information conference hall, Chairman of the Delta State Task Force on Human Trafficking and Illegal Migration, Barr. Peter Mrakpor, flanked by the Commissioner of Information, Mr. Charles Ehiedu Aniagwu, said the Committee has been fully mandated to come out against human trafficking in the state.

“Whether it is Child trafficking on orphanages or any form, the state governor, Dr Ifeanyi Okowa, frowns against it and the taskforce will do everything to ensure that our people are protected”.

He said to mark the 2019 World Day Against Human Trafficking mapped out for 30th July, the Committee would take a walk from Interbua roundabout to Oshimili south Acade where the people would be adequately sensitized.

The chairman who was also flanked by members of the National Agency for the Prohibition of Trafficking In Person (NAPTIP), lamented thus: “it is unfortunate that parents do not do proper investigation into the background of persons who come to ask for their children to be taken abroad by them to sponsor free of charge. It is something that we need to understand that these persons are taking these children to destroy their destinies”.

He called on parents to be mindful of whom they give their children to even as he noted that any person suspected to be trafficker should be reported to the nearest police station or governoment officials.

“So, we want to appeal to parents and the young one especially that, that man and woman that is approaching you to say there is a better life in the UK or US or even Malaysia, the person is deceiving you. There is nothing in those countries that you cannot get here, that is the honest truth but the mentality that life will be good abroad, it is not the truth.

Meanwhile, Mrakpor who doubles as the Attorney-General and Commissioner for Justice, said: “the statistics we are having shows that these persons are cripping into Delta state and convincing our children and even parents to travel abroad. So, there is a call for everybody to be vigilant and to report to the nearest police station or any governoment official any person you see soliciting for people to travel abroad”.

Fielding questions from newsmen, Mrakpor said some persons have been arrested in connection to human trafficking and are cooling off at the NAPTIP office in Benin, the Edo state capital, “and the worrisome part of it is that they are persons who took these boys and girls with the promise that they are taking them abroad for a better life”.

He noted that the Committee would hold town hall meetings with council chairmen, traditional and religious leaders, youth and women groups for the purposes of sensitization and enlightenment across the 25 local government areas of the state.

On his part, the Commissioner for Information, Mr. Charles Ehiedu Aniagwu, reiterated that the state government would not spare anybody in the act of illegal migration and trafficking businesses.

He said the state government was interested in preventive measures than curative measures, “We believe that human trafficking is been seen and practice as modern slavery and here in Delta State government is very much interested in demodernizing that particular practice and that we will do by embarking on this form of sensitization so that the unaffected will be saved from the trauma of either been faring abroad through the shores of the Atlantic Ocean or been stopped from engaging in that practice willingly”, warning those hardened to take advantage of the sensitization especially the traffickers.