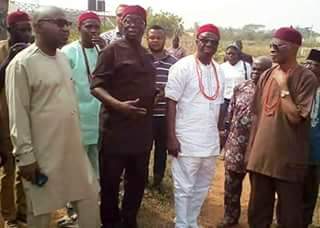 The Delta state government has warned all trespassers on the land where Madonna School for Children with Special Needs is located in Okpanam, Oshimili North Local Government, to desist from further encroachment.

The Secretary to the State Government (SSG), Hon. Festus Ovie Agas, gave the warning Thursday when he visited the school to ascertain the extent of encroachment on the premises.

Hon. Agas said the state government has decided to engage all stakeholders, including traditional institutions in Okpanam, youths, management of the school, and some of the trespassers to reach amicable solution to the problem.

He said the school has been shot down temporarily as a result of the massive encroachment and reminded all developers on the land that ongoing development on the affected land must have relevant permit and approval from the government.

The SSG noted that the management of the school was rendering humanitarian services and therefore should be encouraged.

He warned that any breach of the state government’s warning would amount to a breach of public safety and security, adding that government would not hesitate to act accordingly.

The SSG was accompanied on the visit by the State Surveyor General, Mr. Joseph Ogabu.

Sylva: Dickson's Government is a bubble of lies