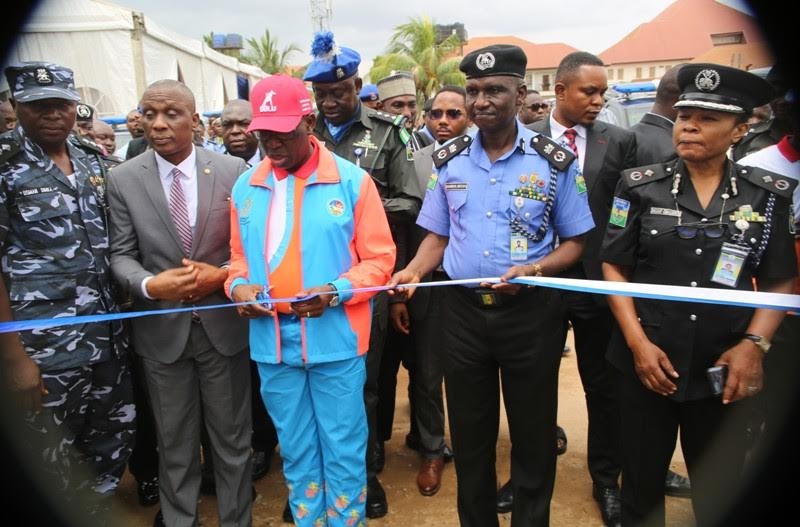 Delta State Governor, Ifeanyi Okowa has called for the support of all stakeholders for the security agencies so as to ensure peace and security in the society.

Speaking Monday in Asaba during the commissioning of the Police Eagle-Net Special Squad Office, and operational vehicles, the governor said that the task of ensuring peace and security of the society should not be left for government alone, stressing that “we cannot continue to leave the affairs of security just to the government alone; individuals who are blessed, corporate organizations ought to and should continue to support police in their work so that they can have the best in delivering their duties because when they have the best working environment they are likely to be more civil in their duties,”.

“As a country and as a people we must realize that we require the partnership of the police and we ought to be their partners if we want things to work, the private sector should support the security agencies to ensure peace and security in the country”, he added.

Okowa commended the Delta State Oil Producing Areas Development Commission (DESOPADEC) and the Delta State Security Trust Fund for the building project and operational vehicles stating that “I must also thank the management of DESOPADEC and the management of the Delta state Security Trust Fund for their collaboration with the police, starting first with the Eagle Net Squad and the Transit camp for the women that was built, we need to partner with Police Force to provide conducive working environment for its officers and members, so as to get the best out of them”.

While congratulating the state Police Commissioner, Mr Muhammed Mustafa, for the leadership qualities in bringing out the best in his subordinates, the governor eulogized the initiator of the projects, DSP Usman Dimka, Commander O/C Eagle-Net Special Squad, Asaba, for his initiative in building the office and Transit Camp and urged others to emulate him.

In his welcome address, the State Police Commissioner (CP) Muhammad Mustafa appreciated Okowa, for his numerous supports to the state Police Command and DESOPADEC for the partnership and the projects.

“The Managing Director of Delta State Oil Producing Area Development Communities (DESOPADEC) was approached and immediately a formal request was forwarded to His Excellency, Senator (Dr.) Ifeanyi Okowa the Executive Governor of Delta State who graciously gave his approval for the building of an Observation Post/Transit Camp and the Police Children School, Oghara and further backed it up with the release of the needed funds.

“The establishment and fortification of the Eagle Net Special Squad was also made possible by His Excellency the Governor”, he added.

He commended DSP Dimka for initiating and completing the projects for the benefit of the Nigeria Police especially members of his squad.

Hear him: “Of note is the exemplary and dynamic leadership shown by DSP Dimka A. Usman the Commander of the Squad whose sterling qualities – commitment to duty, strength of character, patriotism, philanthropy, concern for the poor and the less privileged – have been well documented and recognized within and outside the force and even beyond the shores of the state. When he came to confide in me of his intention to build an office for his Squad, I had little doubt that what he had set out to do, in due time, would be achieved considering his antecedents. I therefore promptly gave him my blessings and promised to support his effort in any way humanly possible. Suffice it to state that today, like every parent whose offspring is doing well, I feel highly proud and elated and all I can say is thank you DSP Dimka for bringing honor to yourself, the Eagle Net Special Squad, the officers and men of the Command and the entire Nigeria Police Force. You have best exemplified the message which has been my watchword since my assumption of office as Commissioner of Police, Delta State Command which is: “leave the Command or any place you find yourself, better than you met it”. By building this ultra-modern office, along with its accompanying Women Police Transit Camp/Public Toilet and Bathroom, you have bequeathed a worthwhile legacy to generations of policemen and women and even those yet unborn who one day will serve in this Command”.

In his brief remarks, DSP Dimka said that the projects were in fulfillment of his vision of what the future police station should look like and providing conducive working environment for his colleagues.

On his part, the Managing Director (MD), DESOPADEC, Olorogun William Makinde, commended the police over their devotion to work and restoring order to the Board when he resumed office.

“The police Eagle-Net Squad that we are commissioning today was approved by Okowa under his decentralized projects and was also funded”, adding that the police children school is also almost completed.

Also, the Executive Secretary, Delta State Security Trust Fund, Barr Sam Osasa, commended all who have contributed their quota to the peaceful environment which is been enjoyed in the state,

He revealed that the agency donated 10 Siena vehicles to the Eagle-Net Special Squad to be able to discharge their duties effectively, “the Trust Fund is supposed to provide funds to security agencies not only the police but we chose to start with the police because of their importance in the society”.

Buhari To INEC: You Must Explain Your Incompetence To Nigerians After Elections