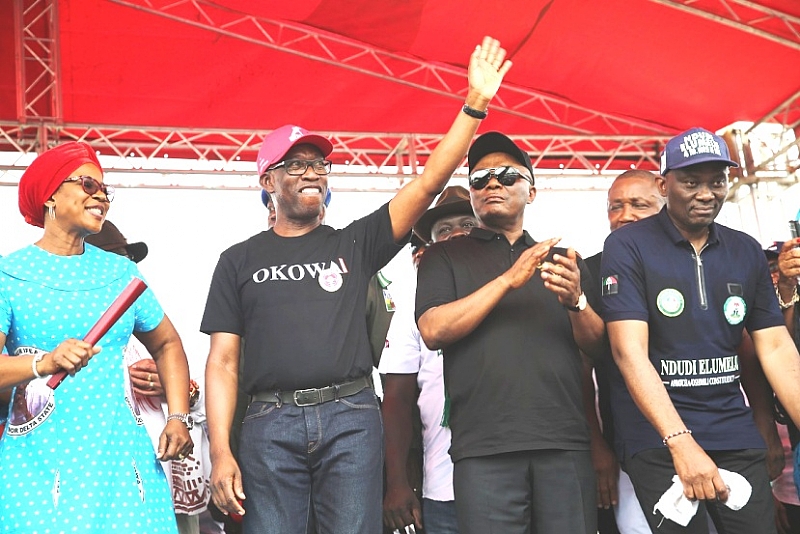 As campaigns for the general elections thickens, incumbent governor of Delta State, Ifeanyi Okowa, has told his kinsmen that if they allow votes from Delta south and central senatorial districts surpasses theirs, he would be a lone voice.

Okowa stated this Tuesday during his campaign tour to Issele-Uk, the administrative headquarter of Aniocha north local government area.

The governor who lamented that Aniocha north gave him just 8, 000 votes in the 2015 governorship election said, “If Delta south votes exceeds your own this time, my voice will not be laud. Thought it was a joke but when I checked it, I discovered that it was real”.

He tasked leaders in the council to carry their followers along so that the council could turn in more votes in the 2019 governorship election, saying that Delta north went through the eyes of the needle to win the gubernatorial race as the other two districts contested against it.

“Leaders of Aniocha north, carry the youths along so that Aniocha north can turn in more votes. The last one was 8, 000. Do not sell your birth right. We entered through struggle. Tell every Anioma sons and daughters that it is our turn”.

“We are going into the elections as a united people, we should cooperate, because, through cooperation, we will get maximum number of votes; let no one be involved in anti-party activity, let us get votes that all of us will be proud of,” Governor Okowa said at Issele-Uku.

He added: “the leaders and the youths should work together, everybody should be recognised; this is the turn of Delta North to complete two terms because, it will not be good that after working for other Senatorial Districts to do two terms respectively, the people of Delta North will fail to support their own for two terms; we have worked, our success stories abound in all parts of Delta, we will do more in our second tenure because, we are experienced and we have peace”.

Also at Akwukwu-Igbo, the governor also said it would be shameful if he wins the election with the votes of Delta south and central senatorial districts, implying that his kinsmen may not get much government attention if that happens, “Please, ensure that we mobilize our people to come out amass, it will be a thing of shame if I win with other districts. If I do, my voice will be small”, he pleaded.

While mocking the All Progressives Congress (APC) governorship candidate, Chief Great Ovedje Ogboru, for never converting his ambition to victory, Okowa said he (Ogboru) is contesting elections but never winning.

“Some people run for election not to win but just for their names to be on INEC list. The person that wants to contest with me in the election cannot stand, governance in Delta State is not a joke, it is for a serious person and I know that I am a serious person. All they are saying is that they will use the security agencies, they will rig. He lacks focus. Does he really have the capacity? He asked.

“there will be no room for rigging, there should be close monitoring of the elections because, our votes must count, collect your Permanent Voters Cards (PVCs), encourage others to get theirs; we should get all the votes that we can”.