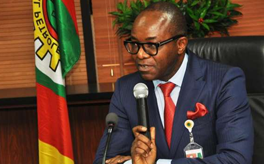 Nigeria’s Minister of State for Petroleum Resources, Mr. Emmanuel Ibe Kachikwu has refuted reports that he is warming up to contest the Delta State governorship seat in 2019.

Some online news portals reported a few days back that the Minister is nursing gubernatorial ambition ahead of 2019 general elections.

But the minister while speaking with newsmen in Abuja described the reports as ‘fictitious, baseless and mischievous’ saying not only do they not reflect his current thinking as a minister in one of the sensitive ministries in Nigeria but they do great disservice to the current efforts to fix the challenges in Nigeria’s petroleum sector.

Kachikwu who was visibly angry about the reports said while answering questions from newsmen that the current administration is taking definite steps to ensure that the challenges which resulted in long queues at the fuel stations become history saying the bandying of spurious reports about a concocted ambition at this time is a serious disservice to the effort being made by government and one that the nation can do without at the moment.

Said the minister: “The enormity of the problems the current administration met on ground in the petroleum sector is one that requires a great deal of focus and commitment to tackle and by God’s grace, we will get there.

“So we can do without some of these distractions that blow hot air and heat up the polity without addressing the immediate needs of the citizenry.

“At the moment we need to support Mr. President in his drive to reform the petroleum sector, so putting unnecessary pressure on those directly working with him will not only distract but could delay the process as given the enormity of the problems all hands must be on deck to achieve the kind of reform needed in the sector.”

He called on well meaning Nigerians to support the federal government in its efforts to reform the petroleum sector in the country and desist from self serving claims that are insensitive to the current challenges and are aimed more at mischief making than achieving a common good.

The minister said as far as he is concerned, the so called ambition exists only in the figment of the imagination of those he described as “political jobbers” who he said are out to distract him from his current responsibilities as delegated to him by President Muhammadu Buhari.

The Minister insisted that he is fully committed to his duty of supervising the Buhari administration’s ongoing reforms at the petroleum sector and helping the Nigerian President achieve his campaign promises to people.

He warned those behind the reports to leave him out of their local politics and urged them to seek their clientele elsewhere and allow him to concentrate more on his current national assignment in Abuja.

a�?The Third Forcea�? a�� NIM, a new and emerging political movement in Nigeria