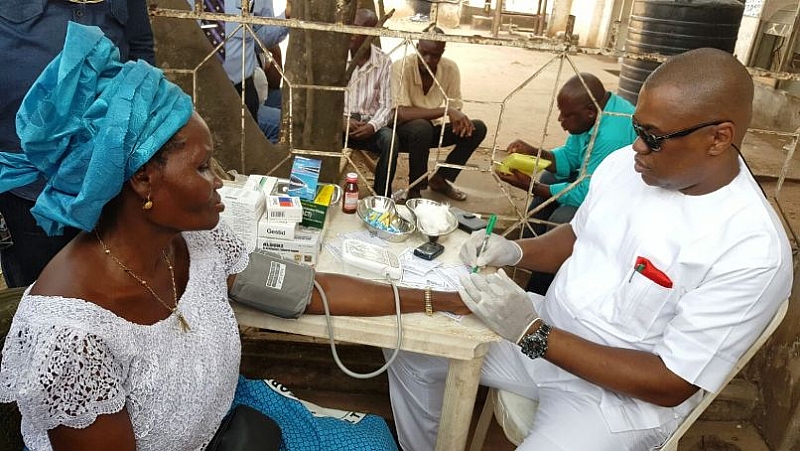 I was so sad to see that few months ago, during Gov. Okowa minor cabinet check up, the State commissioner for Health; Dr. Nicholas Azinge was among those that the governor axed out of his cabinet with the mindset for a more proactive and functional ministry, a development one would termed as those who already see themselves as the establishment players swooped on Azinge over nothing and I have been keenly watching to see how Azinge removal could affect the State health sector positively.

So much has been written about Azinge on the press and how the establishment players from Anioma blackmailed this gentleman who have soft-spot for his people before the governor without proper investigations set him packing from the health ministry, a move many described as political from power drunk politicians from Oshimilli Federal constituency of the State, haven seeing Dr. Azinge fat credentials felt threatened and blackmail was their last resort.

The backbenchers have the structure, the money which many Azinge inclusive do not have to empower everybody within his constituency; they forget to understand that the commissioner is answerable to the governor who cannot do anything without the governor’s approval. They so much blackmailed this well schooled Anioma pride, who never advocated for vendetta of any kind and he was focus on how the governor can succeed even when he was already out of office.

I expected him to fight back but he quickly recanted. Was he scared of the lions that went to blackmailed him before the governor? Or trying to maintain peace since he was adjudged to have so much passion for Okowa and what did he do? His plights were for the governor to succeed in all his endeavors.

Here is a brilliant man who should have be one of the pride of Delta and Anioma in particular who could have used his stay as commissioner to sell his application for elective positions but he was diligently working on how Okowa can succeed, with a view to seeking re-election, speaking to the minds and hearts of Delta people on why they need to support Okowa re-election bid.

I was shocked to see Azinge who was relieved of his commissionership position hosting commissioners, political appointees in his Oghara abode. With the caliber of persons sighted at the hosting rekindled my mind that this Medical guru still has fans after being blackmailed on several occasion for no reason.

During his speech, he appealed to his former colleagues, appointees and other party chieftains to support Okowa re-election, many was wondering if there is stay a man with pure heart like Nicholas Azinge in this part of the world, not looking back on what has happened!

I would have appreciated it more if Azinge was rewarded with the equivalent of the heart he have for Okowa and his people, rather the reverse was the case. Relieving Azinge of his assignment was a great disservice to Deltans.

His wealth of experience amid his vast exposure all over the world would have transformed the State health institutions into a global standard, because his vast exposure and work experience in the United States of America, United Kingdom among others would have pave way for our moribund health institutions, especially the State owned Delta State University Teaching Hospital, situated in Oghara to coast to the dream for which it was established.

That health citadel would be pride of the State if the likes of well schooled, experienced, vast, focused fellow like Nicholas Azinge are give the assignment to run the place. His sojourn would no doubt transform the institution to a global one.

Azinge should be given a chance to build our moribund health institutions. No one can judge him poorly on his previous assignments in the public domain thus far. The Oshimilli players should go back to the drawing board and recruit one of their finest medical professionals. Leaders are not born, they are learned. No one has the monopoly of knowledge; Azinge should be motivated, taught and supported by the people.

Kparobo Ehvwubare is a journalist, social crusader and analyst wrote from Oghara-Delta State. Could be reach on [email protected] , + 2347067546856.

7 thoughts on “Delta Health Institutions Without Azinge: A Disservice”