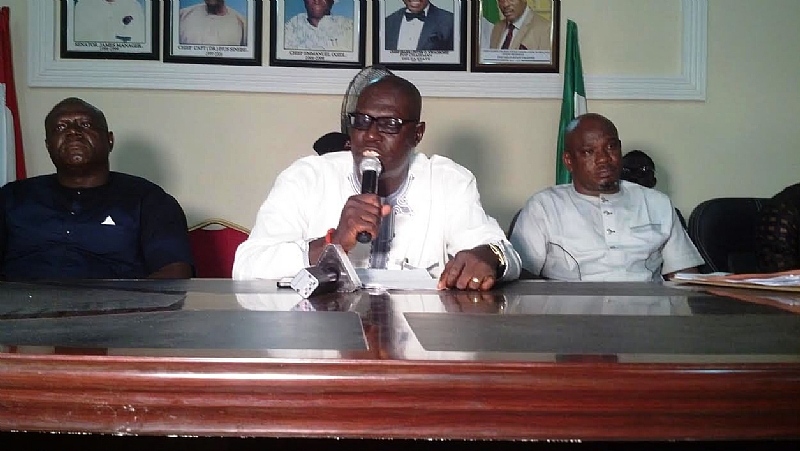 Against the voice of reasoning and large numbers of party faithful who thronged the Peoples Democratic Party (PDP), Secretariat, along the West Africa Examination Council (WAEC) Road, off Okpanam Road, Asaba, protesting the candidature of some alleged blemish candidates for the January 6 local government election, chairman of the party, Kingsley Esiso, went against all odds and presented the chairmen and their Vices to members of the pres.

The candidates included old, former chairmen including immediate local government chairmen that were brought back and recycled and children of notable chieftains of the party and a sprinkling of fresh party loyalists.

In Warri South West, protesters from the Itsekiri nationality alleged that the Deputy Governor of the state, Kingsley Otuaro, imposed one of his associates, one Taiye Duke Tuoyo, whom the people referred to as “strange candidate” on them.

While in Warri North, the aggrieved protesters, Ijaws of Egbema, led by one Prince Lucky Binikuro, dared the leadership of the party amidst fierce looking mobile policemen, went wide shortly after a stage-managed press briefing that there was no primaries in the council area which produced the chairmanship candidate.

In all the 25 local government councils, there is either an alleged imposition of a councillorship or a chairmanship candidate against the wish of the people which has thrown up protests against the party and the leaders at both wards and Local Government Areas.

Political analysts who have followed the trends have opined that these crises may have a negative effect on the party before, during and after the local government polls as some aggrieved members may use the platform to defect to other political parties that are ready to accommodate them.

In his efforts to allegedly cover one lie, the party chairman has however purportedly told several lies which are not correct about the development of the state by the PDP led government in the past 18 years by successive governments.

Briefing the press Monday 13th November 2017 at the party’s secretariat, Esiso, said, “our party, the PDP is prepared to go and campaign vigorously y for our candidates”, stressing that the party’s candidates have what it takes to win elections, “because they have all been carefully, thoroughly screened after which they passed through the primary process and they emerged victorious in their respective constituencies”.

He disclosed that the party would also leverage on the successful two years administration of the state governor, Ifeanyi Okowa, to launch its campaign across the 25 LGAs, an administration which has been generally adjudged to have massively failed Deltans since May 29 2015 when Okowa assumed office as governor of the state.

Hear him: “we are going out there to campaign, basing our campaign on the achievement of the PDP led government ably led by our governor Senator Dr Ifeanyi Okowa, believing that in the past two years plus the PDP led government in Delta State has delivered on our campaign promises which include superlative infrastructural development, including constructions and innovations of roads including construction and renovation of schools, including constructions and renovation of markets and health centres, hospitals and of course creating jibs for our youths through the office of job creation which has gone a long way in empowering our youths.

“Consequently, I believe that Deltans are waiting for us to support our candidates trusting in the contributions of the party in the state in developing our people. There is no doubt that in the past two years plus Deltans have been rejoicing with the service been rendered by our party through our governor in meeting their needs as he promised them during our campaigns before the 2015 elections. So, we believed that because PDP have delivered in our promises to our people, Deltans will always again and again vote PDP all the way. Therefore the 2018 local government election will not be a different. Again we trust that Deltans will vote our party overwhelmingly”.

A contingent of protesters that same Monday led by Barrister Ugha Kurumah, Hon. Dickson Asoki, a leader of thought, and Francis Abulu, secretary, Egbema Justice and Equity Forum took time to speak to journalists amid placard carrying protesters seeking fairness, equity and the enforcement of the principle of rotation of political office which they said is the principle that produced Senator Ifeanyi Okowa today as governor of Delta State.

Barrister Kurumah said: “We are the Ijwas of Egbema Kingdom in Warri North Local Government Area. We are doing this peaceful protest to inform everyone that since the creation of the local government 26 years ago, it is the Itsekiris that have been producing the chairman. We want a political solution to the matter that will ease the institutional slavery of the Ijaw of Egbema kingdom. It is discrimination against the Ijaw people in Warri North.”

He continued: “There is political abracadabra going on in Warri North. Things have not been done normally here. There is secret imposition of an Itsekiri. This marginalization has always been so. This time, we are going peaceful, but we want the wrong to be righted,” Kurumah said.

For Dickson Asoki, a primary election to determine who emerges as the people’s choice for chairmanship candidate of the PDP should be conducted democratically.

Mr. Francis Abulu said: “Governor Okowa who came to power through rotation, should not close his eyes to the injustice that has made it impossible for that same rotation principle to be applied in Warri North. It is lamentable that Dr. Uduaghan who became governor on the basis of power shift and rotation could close his eyes to the injustice being done to the people of Egbema.”

Meanwhile, the PDP Delta state Chairman, Esiso, Monday introduced to Deltans some of the PDP candidates for the January 6 2018 chairmanship elections and their vice chairmen.

Esiso who also unveiled the time-table for the party’s local government campaigns, said the PDP in Delta State is prepared to ensure victory for its candidates. “We believe in our ability, and capability to win the elections.

“We believe that our governor has achieved enough. We want to encourage other parties to come out and campaign on the field. We intend to meet the opposition parties in the field,” Esiso bragged.

Osinbajo, nPDP to meet on Monday as APC moves to douse crisis