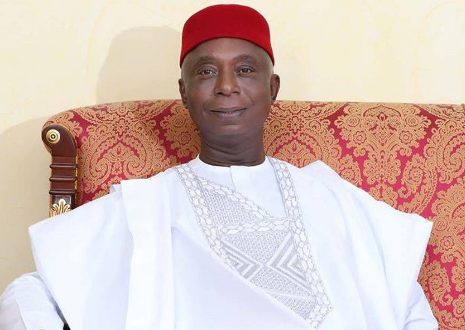 A group under the platform of Integrity and Development Initiative (IDI) has endorsed Prince Ned Nwoko, Delta North senatorial aspirant, describing him as an astute personality and only person among the aspirants contesting to represent Delta north in the National Assembly.

In a statement signed by president of the group, Kenneth Orusi, and made available to journalists in Asaba, the Delta state capital, the group said, having evaluated the personality of Nwoko and his contributions to the Anioma nation, he is most suitable for the coveted position.

The group said it understudied the life of Nwoko from when he emerged member of the Federal House of Representatives between 1999 and 2003, believing that the feat he achieved in the four years he was in the house was unbeatable, hence given the opportunity to go to the senate in 2019, he would make Anioma a better place for all.

The statement said the problem of Nigeria is the political will to execute life changing programmes and policies that could have far-reaching impacts in the lives of Nigerians, noting that from the antecedents of Nwoko, he has people centred programmes and is poised to employ his resources to transform the Anioma zone of Delta state.

According to the statement: a�?Our problem in Nigeria is not the money to execute life-changing programmes but Nigerian leaders are self centred and unwilling to gather the political will to meet the basic needs of the masses.

a�?There is nothing impossible if the political will to do it is there. That is the only thing that is lacking among Nigerian leaders. This is where Nwoko is different. Ned Nwoko is a man who is ready to go out of his way to make everybody happy and satisfied. He doesna��t think about himself but about the people.

a�?When he was in the House of Representatives, he gave out his salary for his people. He executed programmes which his people can still testify of today.a�?

The group said Ned Nwoko has some fine qualities which are missing in many Nigerian politicians. It listed transparency, open mindedness, accessibility to all classes of people and willingness to sacrifice his resources to meet his peoplea��s needs as some good traits of the Delta north senatorial aspirant.

It said Delta North has seen the best person that would represent the senatorial district in the senate, insisting that Ned Nwoko will not disappoint the Anioma people following his track records when he was in the House of Representatives and his unflinching desire for the development of the Anioma zone.

In the statement which was jointly signed by secretary of the group, Austin Igbebe, the group believed the Anioma people of Delta North have found the best representative who will champion the cause of the people, speak for the voiceless and present bills that will better the lot of the average Anioma person.

The group therefore called on leaders of the Peoples Democratic Party in Delta North to give the senatorial ticket to Ned Nwoko believing that Ned Nwoko has everything needed to make a good and desirable Delta North senator.