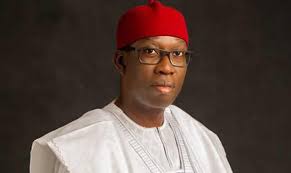 A Peoples’ Democratic Party (PDP), bulldozer in Delta State, Chief Sunny Onuesoke, has reiterated that the present combination that make up the cabinet of Dr. Ifeanyi Okowa, are men and women that would turn the fortunes of Deltans and the state for good.

The political juggernaut insisted that the stronger Delta mantra would be accomplished with the well selected hands, describing them as square pegs in square holes.

Onuesoke, in this exclusive interview with our correspodent Friday, said the set of Commissioners that served in the first tenure of the state governor’s cabinet worked assiduously to deliver on the ‘smart agenda’ mandate.

Hear him: “With the new cabinet in place you should know that Okowa is actually out for a more stronger Delta. The last crops of commissioners were among the best Okowa could have picked for his smart agenda. And of course he did it perfectly well for his first term with his first cabinet team”

While eulogizing those who served in the last administration of Okowa for making Deltans proud, the PDP bigwig affirmed his faith in the capabilities of the present cabinet members to build on their lasting legacies.

He appealed to the general public especially Deltans never to toe the line of destructive criticism as it concerned the appointees but to look at the special consideration of people drawn from the 25 council areas across the state.

“I do not want the public to judge Okowa appointees because what one should consider in the first place is the ethnic coloration of the state. It is absolutely premature for any right thinking Deltan who is conversant with the day to day running of government to blame Okowa.

He continued: “I was the first DELTAN who advise against counter claims on the appointments by Okowa. I do not like to mention names but I do think is not proper to descend so low to rain abuses on Okowa for now that his cabinet doesn’t reflect the true state of the ethnic stock composition of the state.

“Those who are complaining should understand that political appointment is not an economic investment but is just a necessity to drive policies. If those against Okowa are saying the state should emphasis on the economy of political appointment as an index for development then I will totally fight and go against their views”.

He assured that these set of cabinet members would work more than expected of them if they keep by the rules.

“They will perform so long they can abide by the rules of engagement and the budgetary discipline of the state. All we need do is to discipline ourselves that been a commissioner doesn’t make you above the laws of the land or a kind of super human above the people.

“It should not be a feaster galore but a position to elevate the standard of the state.

I also want to use this medium to advice the youths not to look unto the commissioners appointed by Okowa, from their constituency as a source of empowering them with government money made for their various ministries”, he cautioned.