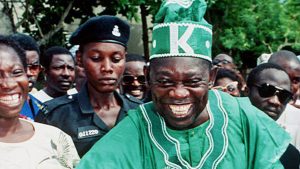 President Muhammadu Buhari has renamed the national stadium in Abuja after MKO Abiola.

The President made the declaration while giving a speech at the Democracy Day celebration which held at the Eagles Square on Wednesday, June 12.

Buhari also spoke about what must be done to atone for the wrongs done leading to the annulment of the June 12 election.

“As we all know, correcting injustice is a free requisite for peace and unity; as part of the processes of healing and reconciliation, I approved the recognition of June 12 as democracy day and invested the late chief Abiola and Babagana Kingibe with national honours as I did with late chief Gani Fawehinmi, the purpose was to partially atone for the trivial damage done in annulling the presidential elections of that year,” Buhari said.

President Buhari arrived in the Eagle Square on Wednesday at some minutes past 10am to commemorate the Democracy Day which held at the main square for the first time.

The President received the state salute and joined in the general rendition of the National anthem.

He also rode in a special inspection vehicle to inspect guards on parade and acknowledged cheers from guests present.

Prior to Buharis arrival, Vice President Yemi Osinbajo had arrived at the venue, he (Osinbajo) to welcome some of the invited guests on behalf of the President.

Nigeria is marking the first celebration of Democracy Day on June 12 today, and the Federal Government is marked the day with a ceremony at the Eagles Square in the nations capital.

The ceremony, which featured a colorful parade, was attended by President Muhammadu Buhari, Vice President Yemi Osinbajo, leaders of the National Assembly, foreign leaders and diplomats.

Todays Democracy Day has the added significance of marking 20 years after the return to civil rule in Nigeria.