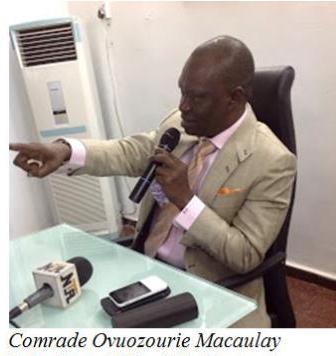 Former Secretary to Delta State Government (SSG), Comrade Ovuozourie Macaulay, said that Deltans and Nigerians by extension have every reason to celebrate the 19th anniversary of the Nigeria’s nascent democracy.

Macaulay who spoke to journalists in his Asaba residence, said that the anniversary is worth celebrating owing to the plethora of infrastructure and human capital that has lined the state’s space since 1999.

He said: “For those of us who came into Delta State, into Asaba after its creation from the old Bendel State, we can say Delta State has grown. Delta State is one of the fastest growing states in this country.

Macaulay stated that because of the complexity of governing Delta State, while developing Asaba, one cannot remove Warri because the bulk of the state Internally Generated Revenue (IGR) comes from there.

“Even in the old Bendel State, Warri was a factor. So you cannot concentrate development in Asaba at the detriment of Warri, Ughelli, Sapele or Agbor, because if you don’t do so Asaba will become so saturated. So what you are doing to this other places is like making them satellite towns. That is why people will want to say that the development is not fast enough.”

He said, “All these Government Reserved Areas (GRAs) we have today from there to Okpanam is new Asaba. If you base your judgment on these indices, you will agree that Asaba has developed. That is why you cannot rate the Governor of Delta State, Senator Ifeanyi Okowa or any governor before him, based on the development of the state capital because we have our own peculiarity.

“Starting from Chief James Ibori, he laid the solid foundation for the state. I will say I was in opposition then because during the military, labour was the only opposition. So I knew how much I engaged the then military government because of lack of development in the state.

“Chief James Ibori came and laid the foundation, built bridges, did road constructions. Dr. Emmanuel Uduaghan came in and built on that foundation. If Ibori had not laid a viable foundation, Uduaghan would not think of an airport. That foundation pushed him to build overhead bridge in Asaba and Warri and attracted a lot of investors to come in. Of course, Shoprite is one of them,” he stressed.

According to him, “today, Okowa has stepped in and he has focused on some other areas as well as some of the inherited projects; for example, the Asaba Airport which he is trying to give a facelift because of the failure of the runway. You go to Agbor today; you will see another mini London coming up. For me, that is the hallmark of democracy. In Delta State, we are lucky to have a running system of democracy based on rotation along the three senatorial zones.”

He stressed, however, that though Delta State and Nigeria at large is yet to attain the status it is designed for; it has made tremendous progress which should be applauded. “In a nutshell, I will say, yes, Deltans have every reason to celebrate and i wish them a Happy Democracy Day Anniversary.”

How God blinded 21 kidnappers in the forest after abducting me: Bishop