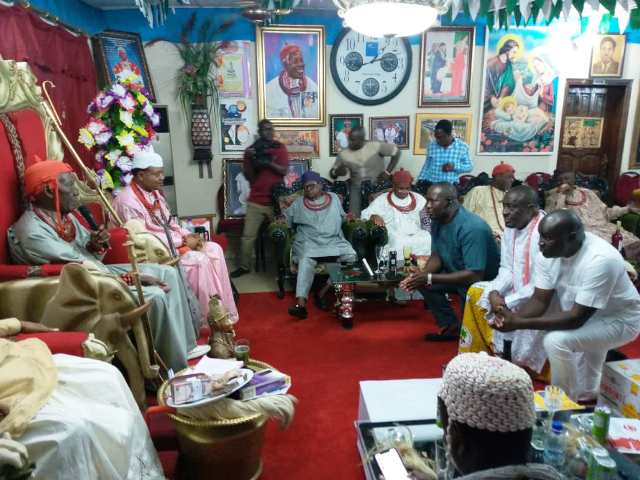 The member representing Sapele, Okpe and Ethiope west local government areas on the Board of the Delta State Oil Producing Areas Development Commission (DESOPADEC), Mr. Joyce Overah, has assured Urhobo monarchs that the Urhobo nation would be adequately represented.

Overah, who led the team of other Board members on a familiarization tour said the visit became imperative following the yearnings and desires of the people to have good representatives and quality projects sited in their communities.

Speaking at the occasion, leader of the team and member representing Sapele, Ethoipe West and Okpe Local Government Area on the Board of DESOPADEC, Hon. Overah, hinted the kings that the members of the Board were on a familiarization tour to formally introduce themselves to all the kings in Urhoboland.

According to Overah, “as part of their constituencies project to meet the yearnings and aspiration of the people we have come to consult with the members of the HOSTCOM communities, present our budgets to those that we represent”.

Olorogun Vincent Oyibode on his part said that their visit to the traditional rulers was a directive from the state Governor, Dr. Ifeanyi Arthur Okowa, aimed at strengthening the ties between members of the State House of Assembly and the people of the oil bearing community.

Responding, HRM Ovie Richard Layeguen Ogbon, the Ohworode of Olomu Kingdom thanked the members of the Board for taking out their time to see the monarchs in Urhoboland and bringing them into the picture.

He prayed for their peaceful and successful tenure, expressing optimisms that they would do better than their predecessors.

The traditional rulers who were present to receive the members of the Board includes the Ovie of Ughelli kingdom, HRM Oharisi lll (JP), Ovie of Oghara, His Majesty King Noble Eshemitan, His Majesty Michael G. Omeru (JP) Ukoro 1, Okobaro of Utu Jeremi, Ovie of Abraka/Umiaghwa, Okparebe, Arhavwarhen and a host of others.

12 sex positions men are ready to die for!