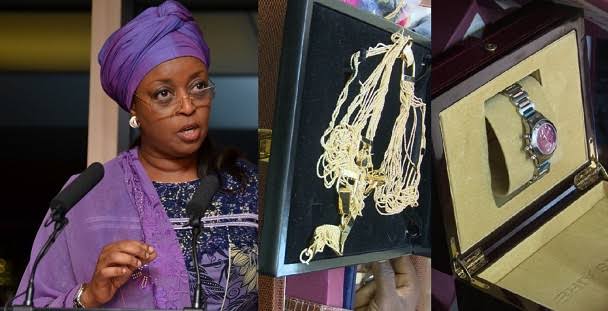 The anti-graft Acting Chairman, Ibrahim Magu, spoke at the commission’s Lagos Office during an EFCC stakeholders’ conference on crusade against cybercrime fraudsters.

Magu, noted that the presence of ‘internationally certified’ auctioneers would make the process transparent.

Besides the jewellery and the luxury houses, Magu said that 242 trailers and tankers recovered from internet scammers will also be auctioned off. The vehicles are in Port Harcourt, Rivers State capital.

The acting chairman took reporters on a tour of the two EFCC facilities in Ikoyi where nearly 100 other vehicles recovered from scammers, including buses and luxury cars, lay idle.

He said this was unacceptable because many of the items were in good condition and should have fetched higher prices for victims of the scams.

The ex-minister, who is suspected of involvement in a $2.4 billion fraud, has also lost many luxury properties to the government via court judgments.

Magu said: “We want to make sure that there’s transparency in the process. Like what we’re doing now in Port Harcourt. There are about 242 trailers and tankers that we are about auctioning. In fact, in the next two weeks, we will auction them. We will advertise, you will see it very clearly.”

COZA: Pastor Obafemi Banigbe Resigns From The Church Board