When you have to deal with your significant others ex, it’s usually never a good thing. Relationships really only have room for two people, and when the ex keeps poking around things get crowded pretty quickly. It may really piss you off that your partner keeps doing favors for or helping their ex. You don’t feel your boyfriend or husband should be letting their ex cry on their shoulder. They had their chance, now they should get a man of their own right?

Right. Specific boundaries should be drawn by the man in your life, and he shouldn’t be afraid to enforce them. Specific boundaries should also be drawn by you and the man in your life, and you shouldn’t be afraid to enforce them. Sure, you have a right to get pissed off when he runs to his ex’s aid when she needs help. Why did you allow that? You want him to stand up for you and your relationship but you won’t stand up for yourself? Why haven’t you told him to take some time off from your relationship and decide which one of you he wants in it? 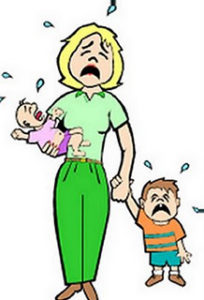 If you want him to show some balls, grow a set of your own. The bottom line is either your man still has feelings for his ex, or he doesn’t. It’s one or the other. If he does, you may as well give him the boot now because it’s only a matter of time. If he doesn’t, there is no good reason to tolerate her interference. Instead of fighting with each other about her, you need to stand strong together.

When kids are involved, a man will often say what he is doing he isn’t doing for her, he is doing it for his kids. Now, if his ex and the kids are trapped on the side of the road because her car broke down that is one thing. He shouldn’t leave them in a dangerous situation. That is a special circumstance and there are many more like that. But to cancel your plans or drop what you are doing because his ex decided she wants to go out tonight and wants him to take the kids, that is another.

Visitation is in place to set proper boundaries. Her social life shouldn’t mean more than yours, and her free time is not more valuable than yours. He may say he is doing it to keep the peace. Well how is he accomplishing keeping the peace if it causes world war three between the two of you? Not exactly working, is it?

The truth is, unless the man you love really still isn’t over his ex, she doesn’t have a hold on him. What they have is a lack of closure. There is a part of their relationship that has not come to an end. He no longer owes her anything, he is not in a relationship with her. (Providing they do not have children, obviously). They are not supposed to interfere in each others relationships or lives.

If they are, you have to look at the person who is giving them this pretend “power”. It is the man you love that chooses and allows this to happen. There is no mystical force involved here, just a continuation of dysfunction that should have ended when their relationship did. You need to put your foot down and show them, not just tell them, that the ex needs to be in the past, or you will not be there in the future.

There Are Two Views to Every Conflict and Both Are Valid

16 thoughts on “Does Their Ex Have a Hold on Them”