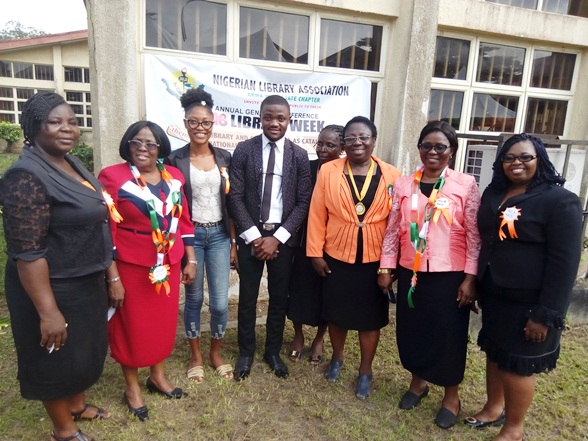 It was a gathering of the gown and the town as the Nigerian Library association, Akwa Ibom State Chapter held her 2nd annual General Conference and 2018 Library week recently in Uyo. The week long event which was held at the Akwa Ibom state public library located at udotung Ubo Street, had as it theme ” Libraries and Social Media as catalyst for national unity and security “.

The Conference which featured readership promotion campaign to schools across the state, training/Workshops for teacher librarians, paper presentations, essay writings, spelling bee and quiz competitions among selected primary and secondary schools in the state also highlighted the inauguration of new executives to pilot the affairs of the association for the next three years.

In an inaugural address, the former acting librarian of the University of Uyo, Dr Eboro Umoren who was sworn in as the president of the association thanked God and members of the association for the confidence bestowed on her. She noted that the task ahead of the new executives are tremendous but not insuperable.

Dr Umoren lamented over the current deplorable state of the libraries to a near extinction in the state which has been deteriorated by the dominance of nonprofessionals in the profession. In her words, ” Virtually everywhere, there is a work to be done. Currently, our profession is yet to be recognized and cherished in our dear state and country at large; the libraries are not managed by librarians; the few library buildings are so dilapidated, in fact, near extinction. So many nonprofessionals in the profession is dominant. The welfare of librarians across all divisions of labour is under the threat of retrogression; poor professional recognition and other tremendous challenges are facing the profession and it requires timely intervention.”

She promised to engage all relevant stakeholders in changing the narratives of librarianship in Akwa Ibom state has she commence her administration. The newly sworn in president further pointed out that the ever increasing challenges currently daunting the profession stems from the consistent inconsistencies in Library development across all levels of government in the state and country at large.

Calling in the government, policy makers and all relevant stakeholders in the education sector, the chartered Librarian postulated that the efforts of government in the free and compulsory education policy will amount to building castles in the air if apt attention is not given to bring to an end the current inconsistencies in the library development in the state through the building and equipping our libraries up to standard across all the local government in the state, employment of licensed librarians to man our libraries since it is an indisputable fact that libraries are the hallmark of education.

The second annual general Conference of the association ended with a thanksgiving service at Victory chapel, University Of Uyo.

A cross section of participants who spoke to this reporter expressed their excitement and satisfaction with all the proceedings of the conference and remarked it as being stately organized.