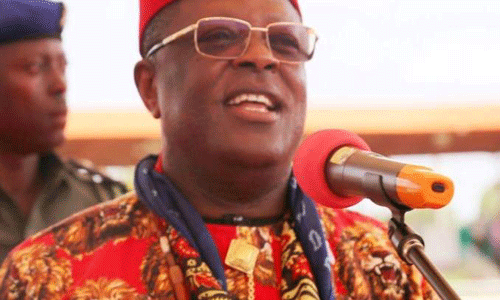 Ebonyi state Governor, Chief David Umahi has urged civil servants in the state not to fall to the antics of his opponents, saying he has their best interest at heart.

Umahi who spoke at PDP rally held at Afikpo North Local Government Area assured the civil servants that his administration meant well for them.

The governor lampooned the state All Progressives Congress (APC) gubernatorial candidate, Senator Sunny Ogbuorji, for making workers' welfare his campaign slogan, saying he should be ignored because he doesn't know anything about governance.

He said Ogbuorji's present lifestyle is enough to convince anybody that he is out to deceive the people and nothing else.

Umahi said his administration has judiciously utilized every Kobo accrued to the state for the betterment of the people including the civil servants.

He futher said apart from regular payment of salaries, he has been paying 13th month to civil servants, pensios, provided 4bn naira soft loan for them as well as payment for their health insurance; just as he further assured the civil servants that his administration would continue to initiate programmes aimed at bettering their welfare.

“You know, the only campaign slogan that this Ogbuorji has is: I will do this, I will do that to civil servants. And I pity him and those falling for such antics. First of all, let him open his house let people come in. That is how you will know a human being. But he will always close his house.

“I asked somebody yesterday who said he is contesting for governor. I said: can you define GDP for me? What is the GDP of Ebonyi state now? Because that is the neucleus of the entire thing we are talking about—-the welfare of Ebonyians. How do you do it Or just want to talk?

“So, I want you to ignore him. I want the civil servants to know that we have their best interest at heart.This civil servants are our brother and sisters and they must know that every Kobo we are having we are using it judiciously for the betterment of Ebonyi people.

“The same thing with pension fund. We have paid their own and we have paid our own. The same thing we are going to do at the local government level. So, I want you to know that we mean well for you”, said the governor Umahi.

Ebonyi signs MOU with Chinese investors for transfer of technology.