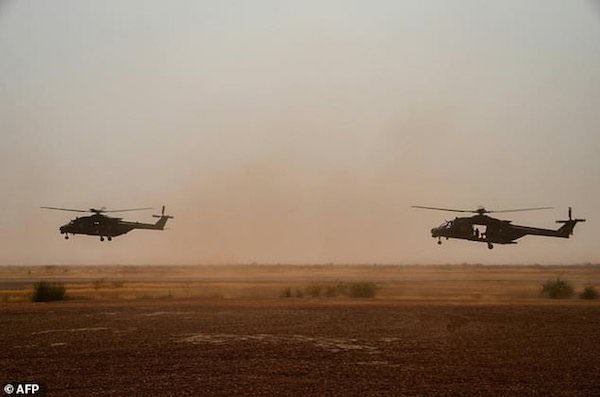 Bamako – A group of former separatist rebels in Mali killed “dozens” of members of a pro-government armed group before a UN helicopter monitoring the fighting crashed in the country’s north, sources told AFP Thursday.

The UN has confirmed two German crew members belonging to its MINUSMA peacekeeping mission were killed while observing the area near the city of Gao following the clashes.

UN Under-Secretary-General for Peacekeeping Operations Jean-Pierre Lacroix said Thursday the helicopter “was conducting surveillance over Tabankort in the aftermath of violent clashes between the signatory armed groups,” when it came down in an apparent accident.

German army Vice Admiral Joachim Georg Ruehle said on Wednesday night the helicopter crew did not issue any distress calls and there were no firm indications as to the cause of the crash.

The clashes pitted former rebels of the Coordination of Movements of Azawad (CMA) against the Gatia pro-government group.

Both sides signed a 2015 peace deal aimed at curbing violence in Mali’s north and limiting the reach of jihadists, but the United Nations says deadly fighting between the groups has nevertheless increased in recent weeks.

“It was a very painful failure for the Gatia,” said a foreign security source. “Several dozen fighters were killed and dozens more taken prisoner,” the source added, noting that two CMA members were also killed.

The Gatia admitted “losses” when a source who requested anonymity was contacted by AFP, but maintained the CMA had also lost men, and refused to confirm their base had been taken.

A source with the High Islamic Council of Mali, a religious authority, said late Thursday that its president was in the northern city of Kidal, a stronghold of the former rebels, to mediate between the groups.

Northern Mali is the site of frequent clashes between rival armed groups, as well as a haven for jihadist activity.

In 2012, key cities in Mali’s north fell under the control of jihadist groups linked to Al-Qaeda, who exploited an ethnic Tuareg-led rebel uprising.

While the Islamists were largely ousted by a French-led military operation, attacks have continued on UN and French forces, civilians and the Malian army.

27 thoughts on “‘Dozens’ killed in Mali clashes before helicopter crash”