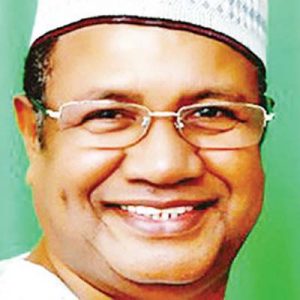 The former Managing Director NSTF and former Presidential Liaison Officer to the National Assembly, Dr. Senator Mohammed Abba Aji has won the PDP Borno Central senate primaries held on Tuesday with a total votes of 542 to beat his second opponent, Grema Terab who got 242 votes.

The senate primary election which was said to be peaceful, orderly, well organized and coordinated in accordance with the PDP party guidelines was conducted by the PDP Borno state Electoral Committee appointed by the national secretariat.

The Chairman of the electoral committee, Dr. Andy Aghadi announced that among the three contestants, Dr. Mohammed Abba Aji got 542 votes , Grema Terab got 242 votes and the third aspirant, Bukar Kachallah got 4 votes out of the accredited 788 delegates.

Abba Aji in an interview with journalists Wednesday in Maiduguri said he was impressed with the conduct of the election and his immediate opponent, “Grema Terab who is the first to congratulate me and even invite me to have photograph him “.

He denied that PDP as a party had parallel primaries in the state, stressing that, “an Electoral Committee under the Chairmanship of Dr. Andy Aghadi was appointed from the national secretariat and sent to Maiduguri to conduct primaries which they did in accordance with the party guidelines and did not conduct another election again.”

“It is Mohammed Wakil we heard separately conducted a primary election alone and declare himself as the winner of his election which I am yet to believe until I go to Abuja and meet him to confirm.

” Because I don't expect him as a learned person, a lawyer, former minister of the federal republic of Nigeria, former majority leader of the house of representatives and a PDP stalwart to do that”, Abba Aji said.

The senate candidate said the Borno State PDP has constituted a Reconciliation Committee under the Chairmanship of the former State Chairman of the PDP, Alhaji Baba Basharu to reconcile aggrieved members of the party and all the factions. The committee has already commenced work making contacts with those who matters.

He added that as for Dr. Kyari Abba Bukar, one of the gubernatorial aspirants in the PDP primaries, he had already made it known to the pubic and withdrawn from the race same day of the primary election.

“This indicates that the party is divided and can not go to election with the divided house which is dangerous and can make the party lose election. I believe Baba Basharu will make success with his wide range of experience, principles and attitude.

” All the gubernatorial, senatorial, house of representatives and state house of assembly as well as party stakeholders have agreed that political offences are forgivable and pardonable. PDP is not about personal or individual interest.

He further explained that the reconciliation will include withdrawal of court cases , holding dialogue and adopting alternative resolution disputes.

The PDP Borno central senate candidate said “I am hopeful to carry out a vibrant campaign with the allied groups as I am familiar with the Challenges of the state and country at large, the state and nation become my major business which will be oneness or unity, joining the leaders of the country to control and manage our Challenges and ensure unity of the country which is not negotiable.”

'Unity and freedom of the country is more guaranteed and enforced by a mutual origin than our constitution. People are highly and always concerned with our region and state not the country and this is healthy for our country as people voice out their problems.

“To support the establishment of NEDC which the law has been passed but the commission not establish. We will pursue RRR in the north east hence the north east was at war nor only insurgency because insurgency was trying to establish their our caliphate.

” Will move motion for a policy that former Head of State, General Yakubu Gowon should be the Chairman of the triple R in the north east to put his experience that was applied after the Biafra war. Orphans in Borno are more than 52,000 and the widows too are more than 50,000.

“I will conduct a census to have the exact numbers and ascertained, their needs as well review budgets to find how and where to put the budgets annually for the orphans and widows. Hence in the past 9 years, 90% of the children of poor are out of school.

” It is not only a state affair, we will bring in Federal Government, INGOs, CBOs, NGOs and ensure their programmes or projects and policies are connected or synchronized with the state government policies and programmes by making the budgets work through and with local authorities and avoid duplication of projects execution by bringing appropriate capacity to governance.