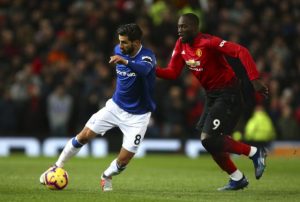 Romelu Lukaku spends a lot of his spare time watching videos and YouTube clips of some of the world’s greatest strikers in a bid to improve his own game.

If he watches footage of his own recent performances for Manchester United, the Belgium striker may understand why he was dropped at the weekend as he goes through the toughest period of his time at England’s biggest club.

The goals have dried up (it’s nine games without scoring, his longest drought in the red of United). His touch has deserted him. He might even be trying too hard.

So when United manager Jose Mourinho spoke during the week of Lukaku’s confidence being drained and his link-up play being off, the writing was on the wall for the player who moved to Old Trafford for $97 million in July 2017.

When the team sheet was released for United’s game against Everton on Sunday, it was no real surprise to see Lukaku on the bench and Marcus Rashford leading the attack.

“Sometimes,” Mourinho said, “we decide that the best thing for the players is to not be on the pitch, (but) to be protected and away from the initial pressure.”

Tellingly, United produced one of its most fluent attacking displays of the season.

Rather than having a striker like Lukaku who often drops deep and ends up congesting the middle of the field, United had, in Rashford, one who stretched the opposition defense and allowed space behind him.

United winger Anthony Martial reveled in the open spaces and scored his fourth goal in four games. Paul Pogba had more freedom to roam in midfield — he had more touches (88) and passes (67) than any other player — and was also more threatening going forward. Fred, recalled to the team, had room to take the ball to the edge of the penalty area and unleash shots.

United had a 2-1 victory but should have won more convincingly. At times, as United’s midfielders flooded forward to assist the mobile Rashford, it seemed like the days of Alex Ferguson.

Everton was most dangerous in the final quarter of the game — after Lukaku had come on as a 65th-minute substitute.

So does this spell the beginning of the end for Lukaku at United? Unlikely.

Mourinho cherishes his big targetmen, such as Didier Drogba at Chelsea. He likes the fact that Lukaku never stops working for the team, saying many times that this is as important as the goals he scores. As Lukaku has said himself, Mourinho sees the striker “like his sergeant on the pitch.”

United had a similar situation when Zlatan Ibrahimovic was in the team in the 2016-17 season and often slowed its build-up play by dropping short. When Ibrahimovic got injured toward the end of his only full season at Old Trafford, Rashford played as the lone striker and United looked a different proposition.

Still, that following offseason, Mourinho chose to buy Lukaku rather than put his faith in Rashford or Martial as the team’s striker.

The 20-year-old Rashford remains raw and his finishing is inconsistent. Martial appears to be back to his best but there is no telling how long his run of form will last.

Perhaps Lukaku will just spend the next few games out of the spotlight. Maybe he can still adjust his game.

“Here I still think my teamwork between myself and my teammates can improve and be much better,” the striker said last week before United played against Juventus. “It’s something that we’re working on. The players need to know me and know my movement.

“When that starts clicking, I think the results I have with Belgium will also come here.”

Lukaku has played 14 games for his national team in 2018 and scored 14 goals. He is Belgium’s record scorer with 45 goals in 79 games. He is too valuable an asset for Mourinho and United to give up on.

POGBA’S STUTTER
Pogba’s stuttering run-up for his penalty against Everton — which was saved by goalkeeper Jordan Pickford before sidefooting in the rebound — was the subject of much debate after the game.

Pogba said he might need to change his technique, which sees him take marginal steps forward without ever really accelerating toward the ball, as goalkeepers are starting to get used to it. Mourinho also said it might need a rethink.

“I think the goalkeepers don’t move and they are waiting for his decision,” Mourinho said, “so I think he probably has to learn from that.”

As for Pogba’s teammates, they are just making fun of it.

Luke Shaw posted a photo on Twitter of him talking to Martial with his hand covering his mouth, and wrote: “Make a comeback in your career and renew your contract. (hashtag)ThingsYouCanDoDuringPogbasPenaltyRunUp.”

‘Holman can change a game of football’