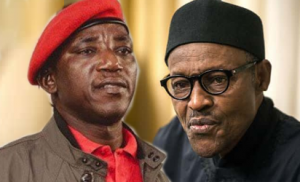 The Department of State,  on Monday stormed the  Secretariat of Nigeria Football Federation  and ordered Giwa and his team, who have been occupying the office out of the building.

According to one of the DSS personnel they were acting on presidential orders from the President of Nigeria Muhammad Buhari who was briefed about the issue on Friday by staff of his office.

Secretary General of the NFF Dr. Muhammed Sanusi was also reinstated by the men of the DSS alongside other members of the Pinnick led board of the Nigeria Football Federation ( NFF) who were forcefully ejected out of office by the Giwa faction, using an order from court.

President, Amaju Pinnick and Scribe, Dr. Muhammed Sanusi, were asked to return back to their offices.

Amaju Pinnick has also been directed to return back to his post as president of the NFF and moves are already underway to have the court case against his board evacuated from the High Court in Jos.

Few hours after, the Secretary General was led to his office by officers of the DSS, where he had resumed his legal duties as the head of the football federation’s secretariat in Nigeria.

The President’s office was also cleared in readiness for the resumption of the Amaju Pinnick.

Pinnick is expected back to Nigeria today after supervising the CAF Round Table symposium with the five African representatives to the 2018 Russia World Cup x-raying the continent’s poor showing at the biggest soccer competition in the world.

Minister of Sports Solomon  Dalung, who favours the Giwa-led group, appears to be out of sync with the presidency, as he was quoted as saying that the action of DSS was tantamount to disobeying court order.

He said that nothing has changed following the Supreme Court ruling  and Orders of the Federal High Court in Jos on the Nigeria Football Federation on April 27, 2018.

Dalung, in a statement, said, “As far as I am concerned, nothing has changed. There is no development after the Supreme Court ruling of April 27, 2018 and the Federal High Court Order of  5th June 2018 because the court has not vacated the order. “Those who are presently trying to instigate confusion, using the name of the President must be aware that the President cannot go against the rule of law. The Order issued by the court has not been vacated and the President cannot vacate a court order because there are clear cut processes of doing that.

“What happened in the NFF today is security excesses but it will be sorted out. The Federal government is urging members of the public to remain calm as it is doing its best to resolve the crises in the Nigeria Football Federation. “The Ministry of Youth and Sports Development has already initiated a process of trying to bring the stakeholders together, to work out a road map out of this quagmire. The Stakeholders’ meeting billed for Tuesday July 24, 2018 will still go ahead as planned.

“We want to assure Nigerians that Government is sorting out the grey areas but nobody should drag the name of the President of the Federal Republic of Nigeria into this. The President is an advocate of the Rule of Law and he cannot be associated with the security excesses of a breach of the Rule of Law. We urge the civil servants in the federation to remain calm and go about their normal duties.”