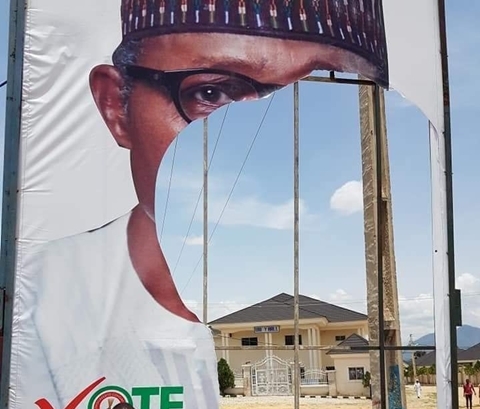 Ebonyi state government has stated its preparedness to embark on a three day sensitization programme against ongoing destruction of campaign posters and billboards of candidates for the forthcoming general election in the state.

It could be recalled that there have been massive destruction of billboards and campaign posters of candidates in some local governments across the state in the recent times.

The government said after the three day sensitization, anybody found destroying Campaign posters and billboards would be punished in line with the law.

The state Commissioner for Internal Security and Boarder Peace, Dr. Kenneth Ugbala announced this while interacting with newsmen in Abakaliki the administrative city of Ebonyi state.

senatorial zones of the state.
He said “His Excellency the Governor has directed my office to liaise with the security agencies next week and have zonal sensitization and

orientation to the youths on destruction of campaign billboards and posters.

“One fundamental thing is that destruction of billboards and posters is the cheapest way to distract people. The billboard or the posters has nothing to do with election. If you remove a poster of a man that God has ordained to win election in the whole of Ebonyi state, that

day how he will win you will not know. So, to me it is madness.

“It is a way of making some politicians who are not professionally inclined to lose focus on their campaigns. But in line with the directive of the Governor, we are going to liaise with all the political parties in Ebonyi state to stop these destructions.

“The first thing to do is to create awareness and put surveillance on them. Anybody that is being caught tearing posters or billboards of anybody irrespective of the political party will be punished in line with the law.

“This is because that is the destruction and we cannot take it and the Governor has given a marching order on that. By the time we finish the three day sensitization on the youths in the three senatorial zones of the state, anybody who decides to continue the destruction must be punished in line with the law”, he said. ENDS