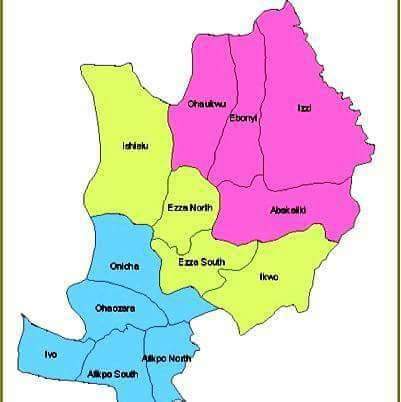 Ebonyi Central is one of the three senatorial districts in Ebonyi state. It consists of Ezza North, Ezza South, Ikwo and Ishielu Local Government Areas. Before the creation of Ebonyi state, the area now known as Ebonyi central senatorial district was the centre point of politics in the defunct Abakaliki zone and the hotbed of the struggle for the creation of Ebonyi state. After the creation of Ebonyi state, it has remained the melting point of politics since the inception of democratic activities in Ebonyi state in 1999. For example, Ebonyi central was the headquarters of Abuja Group which nearly pulled down the first civilian administration of Dr. Sam Ominyi Egwu between 2002 and 2003. From the same Ebonyi central came the antidote to the centrifugal antics of Abuja Group as well as the lifeline for green-horned Egwu who, to the consternation of political actors and watchers of Ebonyi politics, emerged stronger and won his second term election in 2003. Egwu in his second term watched Ebonyi central with eagle's eyes till the end of his tenure in 2007. When Egwu foisted Elechi on the PDP as gubernatorial candidate in controversial circumstances in 2006, Ebonyi central senatorial ticket came in handy in assuaging frayed political nerves.

Ikwo-born Chief Martin Nwanchor Elechi who is from Ebonyi central succeeded Egwu as Governor of Ebonyi state. Using familiarity syndrome and in futherance of his avowed hatred for Ezza people, Elechi who trained as an economist in Congo mismanaged the political temperature of the district in the build up to the 2011 general elections by insisting that he would not want an Ezza man to get the Senate ticket for Ebonyi central. Elechi's stance forced then senate hopeful, Hon. Ugo Chima, to the opposition party and made Ezza Ezekuna people resent the party. Sen. Igwe Nwagu stayed back and wrenched the ticket from the then Governor Elechi, thus demistifying the Governor. This became the political albatross of Chief Elechi who lost grip of his political party, PDP, within the district as the man he never wanted to make the Senate became the senator. Even though Elechi's party, PDP, won the Senate election in 2011, the party lost one of the House of Representatives seats and two Ebonyi State House of Assembly seats in Ebonyi central to the opposition party. Through that development, Ebonyi central became the headquarters of the opposition in Ebonyi state. This situation in Ebonyi central triggered off reactions which marked the denouement of Elechi's otherwise impressive political career: Elechi doubly failed in 2015 in his ambitions to either represent the district in the senate or to dispense political positions in Ebonyi state in the manner of a godfather!

Since 1999, Ebonyi central senatorial district has been represented at the Senate of the Federal Republic of Nigeria by the following senators: Barr. Vincent Usulor 1999 – 2003; Barr. Julius Ucha 2003 – 10th August, 2010; Dr. Emmanuel Uzo Onwe 10th August, 2010 to January, 2011; Barr. Julius Ucha February, 2011 to 3rd June, 2011; Barr. Paulinus Igwe-Nwagu 2011 – 2015 and Chief Obinna Ogba 2015 till date! From the data above, Ebonyi central has been represented thus by the various council areas that constitute it: Ezza North – 4 years; Ezza south – 4 years; Ikwo – six months and Ishielu – 11 years and 6 months. From the foregoing, it is glaringly clear that Ikwo has been in the Senate for a paltry period of six months; Ezza North and Ezza South are at a four-year tenure par; while by 6th June 2019 which will mark the 20th anniversary of Ebonyi central senatorial district, Ishielu LGA alone must have represented the district in the Senate for an unfairly long period of eleven and half years! By this token, an Ishielu man has no moral justification to contest Ebonyi central senatorial election come 2019. Practical political experiences have shown that even though legal justification is important, it is insufficient to attract electoral victory; and no one goes into election for any other reason except to win!

But for the Deputy Governorship position which the ruling PDP will retain in Ikwo LGA as well as other positions like the Pro-Chancelor of Ebonyi State University and Chairman of Ebonyi State Elders' Council, one would have tipped an Ikwo man for the 2019 Ebonyi central senatorial district ticket. The truth is that with the commitment of the current Deputy Governor as well as his capacity, in liaison with other PDP stake-holders from his Ikwo LGA, to attract the votes of Ikwo people, there is need to take the senatorial ticket to a place where it will serve the utility purpose of optimally attracting votes for the party. Concentrating two prime tickets in the district in one local government area smacks of waste of opportunities, while the option of taking the number two position out of Ikwo at this eleventh hour amounts to disturbing an already working arrangement; and such centrifugal drama is politically inadvisable!

Having seen the history of Ebonyi central senatorial district this far, it is pertinent to reiterate that the political experience of Ebonyi central in 2011 has proved that the handling of the senatorial ticket of the district demands a careful approach from any given political party at any point in time as the manner of handling the ticket could strengthen or weaken the support base of any political party like it did to the ruling party in 2011. The presence of the beneficiaries of the old order in the opposition and the concerted efforts of their burgeoning blackmail industry to malign the Peoples Democratic Party administration before the people of Ezza Ezekuna is instructive here. It is pertinent that unlike Chief Martin Elechi who is Umahi's predecessor, Governor David Umahi has demonstrated his love for the people of Ezza Ezekuna through projects like Presco – Ebiaji road, Ukwuachi – Nweke Ishioffia road, the Waste Recycling Plant at Umuoghara, the Onueke internal road network, the Industrial Cluster at Umuoghara; and the involvement of Ezza Ezekuna sons and daughters in sensitive positions like Secretary to the State Government, Commissioners in charge of choice ministries like Works, Water Resources, Agriculture; as well as Senior Special Assistant on Internal Security. The creation of Izzo community for Ezza-Ezzilo is another strong and irrevocable demonstration of love for Ezza Ezekuna people by Governor Umahi. These facts have continued to dwarf the efforts of the opposition to portray the ruling PDP or Governor Umahi as anti-Ezza Ezekuna. The truth is that the bond of love between Ezza Ezekuna people and Governor Umahi is so strong that even some of them in the opposition say in confidence that they will vote for Umahi. However, this fact does not vitiate the need to use the PDP senatorial ticket to further consolidate the relationship between this administration and Ezza Ezekuna people and so mop up all the votes of Ezza Ezekuna people.

In the not-too-distant past, legendary Chuba Wilberforce Okadigbo told the Nigerian polity that “It takes political sagacity to know political arithmetic”! I have no scintilla of doubt that PDP in Ebonyi state under the leadership of Apostle David Nweze Umahi is a sagacious; and that consideration of political arithmetic is necessary in the approaching 2019 general election. In Ebonyi central senatorial district, Ezza Ezekuna people live in large numbers in Ezza North, Ezza South and Ishielu local government areas. INEC voter registration statistics show that as at 3rd of July, Ezza Ezekuna people constitute over 60% of registered voters in Ebonyi central senatorial district. It is doubtful if there will be significant changes in the registration figures between now and 17th August when continuous voter registration will close. The customary voting pattern of Ezza Ezekuna people at home and in diaspora through which they have continued to demonstrate the veracity of their local aphorism that that which is done to the ram is equally felt by the sheep is instructive; and it indicates clearly that the candidacy of an Ezza man in Ebonyi central senatorial district will, as usual, generate a domino effect on the voting pattern of Ezza Ezekuna people at home in Ebonyi central and even on the voting pattern of Ezza Ezekuna people in diaspora at Abakaliki, Ohaukwu, Ebonyi, Ivo, and Onicha local government areas of Ebonyi state during the more important gubernatorial election. Notwithstanding all data registration inhibitions against Ezza Ezekuna people in the recent past, Ezza Nation is still the only clan in Ebonyi state which voting strength make up about 25% of Ebonyi state total voting strength which was 1, 374, 079 as at 3rd July, 2018. This is enough to show that political arithmetic should therefore form the crux of the considerations in the zoning or management of Ebonyi central senatorial district ticket. This is imperative given the disposition of the opposition which equally knows the potency of this permutation but is lurking in the shadows with the patience of the vulture in the hope of exploiting any miscalculation in this area by the ruling PDP. The determined bid of the opposition to make impact on Ebonyi political firmament which for all intent and purposes is deemed a PDP enclave can also be deflated and defeated by the ruling party in Ebonyi state through proper application of the theory of political arithmetic as propounded by cerebral Okadigbo in the management of party tickets especially the 2019 Ebonyi central senatorial district ticket.

In A Memo Huriwa Tasks Nass On Rule Of Law

9 thoughts on “Ebonyi Central 2019: A Time For Political Arithmetic”