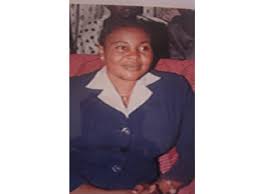 In what looked like a melodrama, Mrs. Joy Mbam, wife of former Secretary to Ebonyi State Government, Chief Fidelis Mbam, yesterday slumped inside a Magistrate court sitting in Abakaliki, where she was arraigned by the police on two count charge of murder and forgery.

She was accused of conspiring to kill the husband sometime in 2018 and later forged his will to claim the deceased property.

However, Joy was arraigned in court on Friday where she fell down when she stepped on her seat to enter dock during the arraignment.

She had stepped on the dock constructed with plywood that has gone bad when she fell from the back and hit her head on the ground.

The Chief Magistrate, Chinedu Agama rose from the seat and ended the court session abruptly while lawyers, policemen and women and some other persons who were in court carried the woman up after she laid on the ground for about 15 minutes.

The Chief Magistrate later came back for her arrairment and she was arraigned on two count charge bothering on murder and forgery.

The offence is punishable under section 316 of the criminal code laws of Ebonyi state.

The Defense Council, Nwakpu Nwode, however raised an objection on count one which bordered on murder.

He averred that the section 316 which he was charged with provides for definition of murder and did not proffer punishment.

“We are opposed to the strength of the section 316 to infer murder generally. The same sec 316 has no punishment section. We pray your worship to discountenance the section 316 and strike the charge out”, he said.

In his ruling, the magistrate, Chinedu Agama agreed with the prosecution that the said section was ambiguous and accordingly struck out the first count.

Thereafter, the second count charge was read to the defendant after which she pleaded not guilty.

The defense council applied for bail urging the court to grant her bail on lenient terms. The prosecuting council did not oppose the bail application.

The Magistrate granted the bail in the sum of N100,000 with one shorter in like terms. He adjourned the matter to 18th February for hearing.

Chidi Lloyd Apologises To Buhari, Tells Magnus Abe To 'Take His Sanctimony To The Dogs'