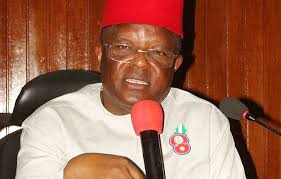 Ebonyi state government has earmarked over N7 billion for the provision of accommodation for teachers with solar power and other facilities in all the schools in the state.Well  accommodation should be like relaxing,comfortable,fun,etc. check here how to choose best accomodation.

Governor David Umahi made the disclosure in his address during the 59th Independent anniversary of Nigeria and 23rd anniversary for the creation of Ebonyi state at Pa Ngele Oruta township Stadium, Abakaliki.

The governor announced that N500 million will be injected in the training of teachers after which they will organize test for them and those who will not teach will be redeployed to Ezzamgb vocational school.

He restated the preparedness of the state government to hand over schools to the missionaries to ensure that educational sector returns to its former glory characterized by effective teaching and learning.

He assured that his administration will make the thirteen general hospitals in the state to be viable for people to access basic health free of charge adding that 187 health care centers have been selected to be equipped.

Chef Umahi commeded the President on his fight against corruption, food sufficiency and agricultural programme including work going on at the Niger bridge and all the efforts of the President in making Nigeria a better pace.

He stated that the closure of the Akanu Ibiam international airport was for the safety of their people and that he had a meeting with the President where they agreed on the modalities for the completion of the project.

He also stated that his administration has Provided two coaster buses and pick up vans accompanied by security officers and a laison office in Owerri for those who will be going to board plane in Owerri Airport.

Taraba Governor Bans Movement In And Out Of State

7 thoughts on “Ebonyi earmarks N7 b for teachers' accommodation in schools.”