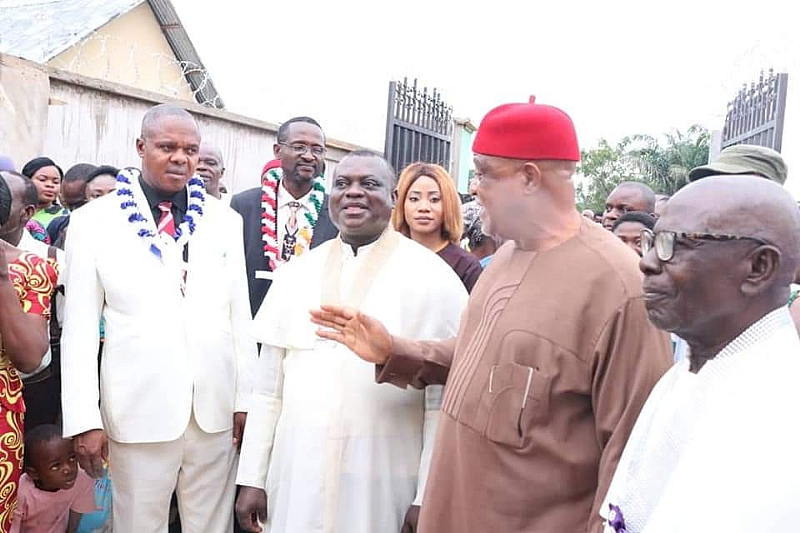 The Chairman of the Christian Association of Nigeria (CAN) Ebonyi State Chapter Rev Father Dr Abraham Nwali, has reiterated that the state government has spent N500 million in empowering 5,000 Clergy men and women between 2016_2019 .

Dr Nwali who doubles as the Senior Special Adviser to Governor David Umahi on Religion/Welfare Matters made the declaration at the St Paul 2 Parish Ugwuachara Abakaliki the State capital on Sunday on the occasion of activities marking his 25th priestly ordination anniversary .

He said that the present administration under Engr David Umahi has regularly released Grants and monthly stipends to Religious men/women, widows and less privileged to enable them establish Small and Medium Scale Enterprises.

“The present administration in the state have touched the lives of 5,000 Religious men and women to the tune of N500 million by empowering Ministers of God,” he reiterated.

According to him,” The people have been given attention, we have identified with the sick, the physically challenged, poor and the needy through grants and payment of medical bills to thousands of indigent patients in hospitals across the state”

He said that the anniversary was a period of gratitude to the Almighty for the grace and wisdom to serve in his vineyard.

“When I remember today that I am 25 years as a priest, I say thanks be to God, it calls for gratitude to God. It motivates me in my spiritual life,”

” I commend every body who honoured me today by participating in this event, the best thing I have been able to achieve is being able to ask God that our names be written in Heaven”

He urged Religious Leaders to strive and uphold the virtues of humility and righteousness in the discharge of their ecclesiastical duties insisting that: “The Clergy is there for the people, do not talk about yourself, be humble, shun selfishness, always remember that we are mere Servants of God”

Earlier in his speech, Governor David Umahi represented by the Attorney General /Commissioner for Justice Cletus Ofoke extolled the leadership qualities of Rev Father Nwali as a priest stating that he appointed him as his Special Adviser having distinguished himself as a true servant of God.

The Governor maintained that the celebrant Father Nwali had since his ordination embarked on charitable works and care for the less privileged, indigent, widows and the needy.

In an interview two of the parishioners at St Paul 2 Parish, Ugwuachara Mr Ikenna Nzimiro and Mr’s Basil Okorie respectively, commended Father Nwali for his exemplary life style and his avowed commitment towards assisting the less privileged members of the society.