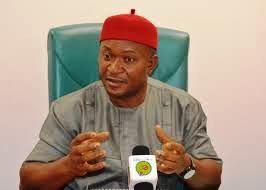 The member representing Ohaozara/Onicha/Ivo federal Constituency in the House of Representatives , Linus Abaa Okorie ,has enjoined his constituents and supporters to use the opportunity of the celebration of the birth of Jesus christ to preach to all Ebonyians especially in the hinterlands to support the election of the Peoples Democratic Party(PDP) presidentail candidate,Alhaji Atiku Abubabakar and his running mate,Mr.Peter Obi in the February 2019 presidential election.

Okorie who is the Ebonyi state Coordinator of Friends of Atiku(FOA) in a statement in Abakaliki on Monday said the former Vice President and the former Anambra governor were the only credible alternative to the bumbling All Progressives Congress (APC) led leadership in the country.

The experienced lawmaker decried what he described as ” over three years of inactivity masked with deliberate falsehood and window-dressing by the APC federal government' and called on the people to vote out the APC during the polls.

He contended that for the nation to rediscover itself again and take its rightful place in the comity of nations , the likes of Atiku Abubakar and his running mate Mr. peter Obi should be voted for in the forthcoming presidential election.

He noted that the duo posesed the leadership experience and the political will needed to get the nation working again.

Okorie who is the Chairman House Committee on Agricultural Colleges and Institutions assured that the PDP federal government under Atiku Abubakar and Mr.Peter Obi would right the wrongs of the four years administration of the APC when they take over in 2019.

Speaking further Chief Okorie reiterated the readiness of Friends of Atiku in Ebonyi to work with other support groups and stakeholders to deliver their candidate, Atiku and his running mate Mr.Peter Obi during the polls.

“The nation can not afford another four years of inactivity masked with deliberate falsehood and window dressing, we want a leadership with honesty, sincerity and commitment which Atiku and Obi represent.

“We are tired of wobbling as a nation ; it is time to refix the nation and Atiku and Obi ticket will do it.

” Join us to preach this message in your various clans ,villages and communities as you celebrate” he said.