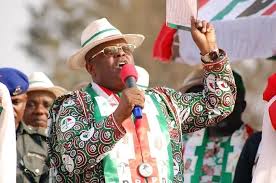 Some members of the All Progressives Congress (APC) from Ebonyi State on Tuesday accused Ebonyi state governor, Dave Umahi, of operating death squads with penchant for crushing opposition members and critics.

The band of APC members in the state also accused the governor of allegedly hijacking the Federal Governmenta��s Social Investment Programmes, excluding members of the ruling party.

They made the allegation during a courtesy call on the Secretary to the Government of the Federation, Mr. Boss Mustapha, in his office.

According to the chairman of the state chapter of APC, Eze Nwachukwu, the security challenges being witnessed in the state is the handiwork of the governor who is said to be actively involved in wanton destruction of properties belonging to APC members and brutalising them.

a�?The former Secretary to the State Government who resigned recently confirmed in his resignation letter that the governor has a record of moving against those he is not on the same page with when he said he knew the governor will go after him, his family and friends,a�? Nwachukwu said.

Nwachukwu who accused former SGF, Babachir Lawal, of corruption, anti-party activities by openly supporting Umahi among others, recalled that at a church thanksgiving organised shortly after he was appointed, Lawal, had disclosed that as his friend, Umahi sent bags of rice and money to him when he got the appointment.

The state party chairman, also accused the state Commissioner of Police, of also colluding with the governor, urged Mustapha to intervene and ensure his redeployment, use his good office to ensure the disbandment of the killer group allegedly being operated by the governor and the neighborhood watch.

Meanwhile, in a swift reaction, the Ebonyi state government has however said the governor would never be distracted by the antics of those it described as impostors.

a�?Pastor Nwachukwu who is a factional chairman of APC in Ebonyi State is notorious for his lies and penchant seeking cheap publicity but unfortunately, this one has hit the woodwork as it has failed to attract the sentiment he sought for, said Chief Press Secretary to the Governor, Emmanuel Uzor.

a�?There is nothing like killer squad as he said even though he was merely voicing out his frustration especially after losing grip of the party at the state, he has migrated to Abuja where he engages in systematic political alms begging to survive and he feels the only way to do that is to be going from one office to the other to cast aspersions on the hardworking governor of Ebonyi State.

a�?Governor David Umahi is very busy with his developmental projects of repositioning the state and making it a model of modern state and therefore is not distracted by careless and irresponsible vituperation from unfortunate political jobbers parading themselves as opposition.

a�?From all available records, Governor Umahi has rescued the state from the fangs of poverty and underdevelopment and has never been found wanting in the discharge of his official duties.

a�?I advise Nwachukwu to put his house in order and take care of the cancerous divisions in his party and carry out issue based campaigns instead of his usual naked dance in the marketplace having lost relevance in his own party.a�?

Uzor said the governor would not be distracted a�?by careless and irresponsible vituperation from unfortunate political jobbers parading themselves as opposition.a�?

Boss Mustapha told members of the delegation that his office is that of the government of the federation and not for APC alone.

He said since members of the delegation was made up of former members of Peoplea��s Democratic Party (PDP), it is not impossible for the governor to join the party in future.

The SGF said, a�?Who says David Umahi cana��t be with us tomorrow?

a�?So, we have to look at the prospects of the future. Like I said this is the office of the government of the federation, he will come here, we will receive him, because that is what is expected of this office.

a�?I advocate as a political philosophy that you treat people as individuals not as party members so that we do not put ourselves in different framework and when questions of maneuvering and adaptability arises, we have difficulties getting over those barriers we have created.a�?

Mustapha said since it was his desire that Buhari wins the 2019 elections in the entire South East, the dynamics of politics behove on the game in the manner it ought to be played.

a�?With President Buharia��s declaration to run for 2019 elections, they are several people that are knocking and it is high time we opened our doors and even evoke our provisional constitutions that will allow them to come in.

a�?This is the time to open your arms and your doors to even those that are perceived as enemies, you must have a large heart to receive them.

a�?Thata��s why Mr. President himself specifically directed the party to consider the provisions of waiver as provided for in our constitution. Why is he saying that? It is because in this game there are no permanent enemies or friends.

a�?The dynamics of politics can change and people that you perceive today are not with you, will be with you tomorrow. So your ability to receive them with grace will determine whether they will feel welcome or isolated,a�?he added.

The SGF stressed that the shortest and surest way to Igbo Presidency is to support Buhari in 2019.