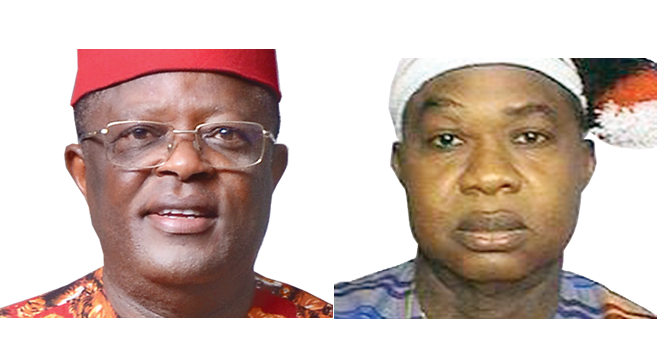 The Governor who made this known while speaking at Isaka, the Council headquarters of Ivo local government area, during his reelection rally held in the area, maintained that Ogbuorji would vomit every Kobo he embezzled from the money meant for the projects.

He noted that he would not allow any substandard project to be executed in the state under his watch.

“I am going to probe all the federal government roads that he (referring to Ogbuorji) is currently doing that have already failed. I will probe all of them and the street light project and I assure you that I will make him vomit every Kobo that he has embezzled in those projects”.

Umahi further appealed to the people to stop wasting their time on the APC guber candidate, as according to him, he has no capacity to withstand him.

“I want him to come and debate with one of my House of Assembly members. That is his qualification. I won't waste my time on him. I am a divine project. Who was he before we pushed him into politics? So, don't waste your time on him”, Umahi urged the people.

He further advised the PDP supporters not to attack any person or tear posters/ billboards of candidates of other political parties in the state, saying, there was no need since they are already incharge.

“I want to advice you: do not attack anybody and do tear anybody's posters or destroy bill boards. We are in charge. And so, if in the mixed of God, there is devil. Does devil matter before God? No! So, God allowed devil to exist till the last day. Our own last day for the devils is on February 16 and March 2nd of 2019”.

Umahi who described Ivo LGA as his second home, announced that work would immediately resume on the Ivo water project.

The Governor also said in compliance to the request made by the former Secretary to Government of the federation, Senator Pius Anyim, he would flag-off of the construction of the road leading to His Royal Highness, Agu(3), Eze Moses Ngele of Ishiagu, and Asa road on Monday.

The governor who said needless enumerating what his administration had done for the area or what he would do if reelected, assured the people of Ivo LGA that he would construct their urban roads in his second tenure in office.

Former Secretary to Government of the federation, Pius Anyim, while commending Umahi's excellent performances in office noted that the governor meant well for Ebonyi people considering the qaulity of people flying the PDP flag in the state.

He said PDP has no opposition in the upcoming general elections in the state.

The State PDP Chairman, Barr. Onyekachi Nwebonyi, in his speech urged the people to vote all the PDP candidates including Alhaji Atiku Abubakar, the presidential candidate of the party.

The DG, Umahi's campaign Organization,Chief Fidelis Nwankwo, in his remarks urged the people to vote Umahi for the prosperity of the state and its people, adding that APC meant poverty and should be rejected.

Who is Tony Nwoye?