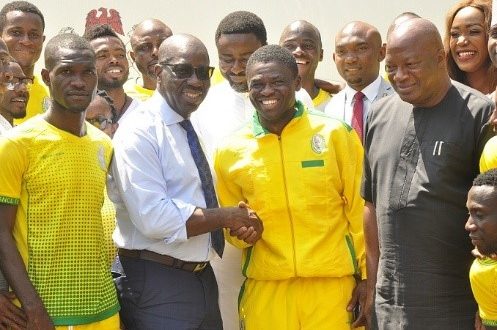 Edo State Deputy Governor, Philip Shaibu, spoke to some journalists shortly after the first home match of the newly-promoted Bendel Insurance of Benin.

He also spoke on his active involvement in competitive football at 49.

Yes I am excited like many other fans of the club and so it was nice to play our first home match in the NPFL after the match against our contemporaries, Remo Stars, in Sagamu last weekend. It was a first true test for Bendel Insurance playing in professional league because the team met with Kwara United that is already in the NPFL. It is a good test to check the capacity of players and determine how far we can perform in the NPFL. We have a very young team and a team that has limited time to prepare. They had one week after the Super 8, so they have to rush into the NPFL. No time to embark on a tour or inject new players but the good news is that we have a very young team that is dependable.

Did you see the promotion coming or it was a surprise to you as well?

Last year, we were asking ourselves if it was going to be possible for Insurance to gain promotion. Our target has been that we should get promoted this year and I was looking at the boys we have on ground that if they should play up to 50 or 60% of their capacity, I was convinced that we should be able to move up. Good enough, they were able to play well and they got promoted into the professional league. I later discovered that the enthusiasm and commitment Governor Godwin Obaseki has for Bendel Insurance, is same for many fans and so we were able to work together to bring the team back. We appreciate support from fans and the media. These players also read newspapers and they also listen to radio, they were motivated by the high belief of many fans nationwide.

What is your general impression about the first match against Kwara United?

If you watch the game today, you’ll see that we were able to get the crowd to be professional. If not for the referee’s error, we actually won the game. The goal disallowed was not an offside goal but we can’t rule out human mistakes. The error cost us home victory, which means the boys are good. The chairman sports commission, Godwin Dudu-Orumen was given a mandate to meet with different categories of fans including those we know can create problems.

So, throughout the week he spent time having meetings with the fans, to lecture them and he told them the implication of any negative action. He told them to always appreciate God and display good sportsmanship while expecting any of the three results –a win, a draw or a defeat. If we lose or draw, we should have the same spirit. In the match against Kwara United, it was a test of the mobilization and training we had for the fans because ordinarily with such a goal they disallowed, there could have been crowd issues and even when they were shouting on their seat, nobody threw anything, nobody left their seat and after everything, they were calm. Also, the referees walked out and nobody insulted them. Even the home and away teams were calm towards each other and that is what we are going to do throughout this season.

What is your advice on the crowd disturbances experienced twice so far in the new season?

It is unfortunate and the LMC should know that there is a limit to endurance when provoked. They should also educate fans and support all teams to provide better security. We will try and make sure that in all our home and away matches, our fans will be of good conduct but the LMC should make sure that the league is truly professional in all aspects.

Is there a target for the team and the coach generally?

One thing I know about our boys is that they have this winning mentality and I share their spirit that we will not lose any match. Our target is to be among the super six at the end of the season because we have the ability of winning anything super. We are also looking at the continental ticket. The governor has given us that target and we are working towards it.

At 49, you play football actively as a registered player of Insurance, talk about your background in the game and how you are coping?

I was active in competitive football before I joined Bendel Insurance while I was in the university. I played various games beyond the inter-faculty games that was organised and I was the captain of social science in the University of Jos but before I got here, I was a member of the U-17 YSFON team that travelled to US at a time. I played in the Abuja league for Foreign Affairs. I also joined the Internal Affairs FC before I had an injury that kept me out of football for six years. I couldn’t continue with football and I also stopped playing actively when I got to the university. So now, I have started again before I joined the Bendel Insurance. I also played in the All-Stars Football team and we attended many matches. I played for Edo State and got involved with Babatunde Fashola when he was Governor of Lagos State. They do host All- Stars games in Lagos and I attend many of the matches


What inspired you to play with Insurance?
I did not plan it at all, My plan was to just train with them, so while I was training, one of the coaches said sir if you could be playing like this for the team, we can add you to the team to make two experienced players in the team since the rest of the boys are inexperienced. That was how I joined t h e team to p l a y some friendly matches and I am still very active. I don’t dribble or allow too much contact; I only touch the ball when the team want to kill the game so that’s when I do come in. I am not playing to dribble, I am playing to pass the ball and if the opportunity comes, score a goal that’s the kind of game I play.

Many people think I am a ceremonial player, no I am not. I am still very active on the pitch. I train a lot and I don’t miss the endurance training of the team on Mondays and the tactical training on Thursdays. I attend these two except am out of the state. I do train with the team and by 10 O’ clock we are done and I will go back to the office and also I do jog about 2 KM every morning before I go to work. So that is the secret of my fitness.

Since Edo State will host the National Sports Festival in 2020, when Samuel Ogbemudia Stadium will be ready for use?

We are making it an Olympic size stadium and the purpose is not only for football but for all other sporting activities and we are also working on the Indoor Sportshall. We are constructing the swimming pool and we are working on the tennis court. We are working hard on the 2020 sports festival so many facilities are coming in as we speak so by the time we are done, our people will marvel because the vision of the governor is that; once upon a time there was a governor in Edo State that used to be a father of sports. He is telling us to bring the lost glory back to the state and that’s why we started this infrastructure last year and when we started it people were like why are they doing all these things, which kind of games are they going to be playing here but when they got the news that we are hosting 2020 they now know our reason.

But it is not for 2020 alone, we are trying to groom sports and education together in Edo State. And that is why we are merging sports and education together. And that is why we are having 20 mini-stadiums across the 18 Local Governments of the state. Most of these stadiums will be inside the schools that have a sizable land that every sporting activity can take place and we have marked them. The Edo State league where we will have division 1 and division 2. The winner of division 1 and 2 will play in the super league so as to qualify for the national league. We taking the Edo 2020 seriously and we expect the stadium to be ready by April. The Governor has said the preparation for the competition must start this month and we will roll out plans from next week. – Culled from New Telegraph.