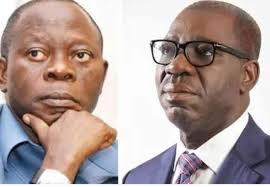 Edo state government has said that it had petitioned the Inspector General of Police, Muhammed Adamu, as well as the Department of Security Service (DSS), demanding the arrest and prosecution of the National Chairman of the All Progressives Congress (APC), Comrade Adams Oshiomhole.

Deputy Governor of the state, Phillip Shuaibu told newsmen in Abuja while fielding questions from journalists.

Shuaibu said that if Oshiomhole cannot go to Kano or any other APC controlled -state without seeking the state governor’s consent, then Edo should not be an exception.

Shuaibu, however, said Oshiomhole remains his father even though they are presently not on the same page politically.

An open letter to the Anambra electorate