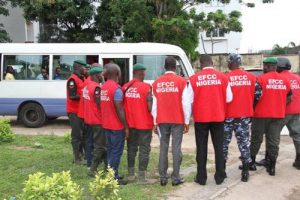 The defendants were arraigned on an 18-count charge bordering on obtaining money by false pretence, forgery, using false document, altering and conspiracy among others, before Justice Mojisola Dada.

During the arraignment, two Senior Advocates of Nigeria (SANs), Dr. Muiz Banire and Adeyinka Fusika, appeared for the first and second defendants.Abdul is the first defendant while Isiekwene is the second defendant. The third defendant, former Chief Finance Officer of CIES, Adeyinka Adewole, was said to be at large.

EFCC counsel, Muhammad Idris, informed the court that the charge had been amended due to absence of the third defendant. He urged the court to issue warrant of arrest against him and take the plea of the others.

Reacting, Olumide-Fusika told the court that Adewole was out of the country when the matter was filed.He urged the court to grant him leave to appear on the next adjourned date.

But the defence counsel pleaded with the court to allow them take an undertaken to provide the defendants on the next adjourned date when their bail application would be determined.After entertaining submission of the counsel, Justice Dada granted the prayer of the defence team and adjourned till tomorrow for ruling on the bail application.

Shippers, agents decry involvement of foreigners in the clearing of cargo

7 thoughts on “EFCC arraigns Ishiekwene, others over alleged fraud”