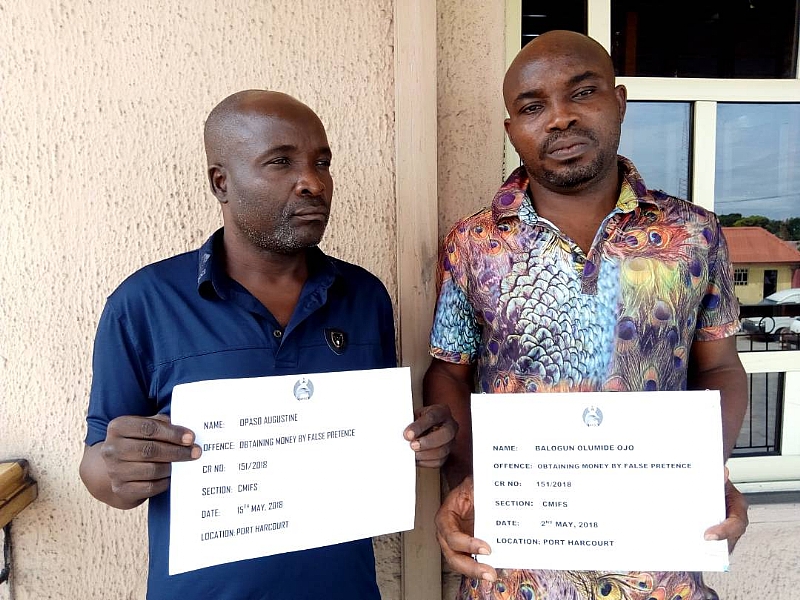 Operatives of the Economic and Financial Crimes Commission, EFCC, have arrested two suspected fraudsters for defrauding a victim of N31, 000,000 (Thirty One Million Naira only) in the guise of making “money medicine” for him.

The suspects: Balogun Olumide Ojo and Augustine Opaso were arrested in Port Harcourt, Rivers State. They were arrested based on a petition by their victim, who alleged that the suspects deceived him into believing that he could access his family wealth through some “special prayers” that would offer him “money medicine”. One of the suspects, Ojo was arrested at the Reception hall of Presidential Hotel, Port Harcourt where he was waiting to collect more money from the victim.

Investigation by the EFCC showed that the suspects were operating in Port Harcourt and Akungba, Ondo State. Ojo confessed that they were operating a shrine in Akungba where ” special money-making prayers” were being offered. A search was conducted at the shrine by the EFCC and different kinds of images and spiritual items were recovered. The suspects also confessed that money was paid into their bank accounts by the victim and in some cases, cash was collected from him to purchase materials needed for the money medicine.

The suspects would be charged to court soon.