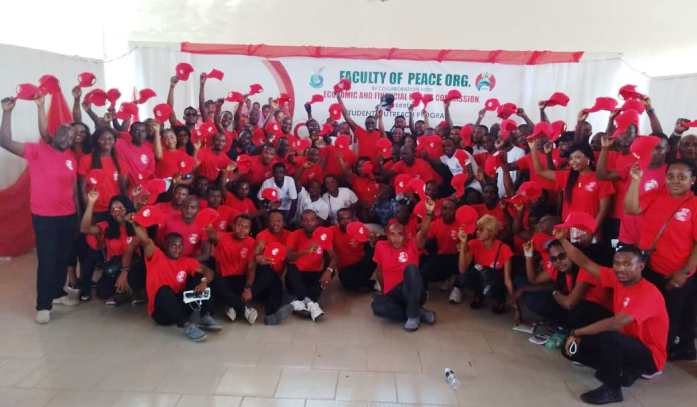 The Benin Zonal Office of the Economic and Financial Crimes Commission, EFCC, has recovered a total of N312,561,585.31 and secured 9 convictions, with 28 other cases on going in various court. The head of operations, Mailafia Yakubu, who announced this on Friday June22, 2018 in Benin city as part of activities to mark the first year anniversary of the office stated that the Commission will not relent on its efforts to eradicate corruption in Nigeria.

Aside from prosecution, Yakubu said the Commission is also keen to nip corruption in the bud as it engages in enlightenment and sensitization campaigns among secondary schools and tertiary institutions. “What we are trying to do through this initiative is to catch them young because we believe that if the next generation see corruption and economic and financial crimes as evil, then corruption would be exterminated.”

As part of its celebrations, officers in the zone visited two orphanage homes were a token presentation of household items was made. Speaking at the event, Yakubu stated that the Commission empathizes with the children as some of them were victims of corruption. “Sometimes it is the effect of corruption that brings about situations like this. That is why we are here to associate with you.”

Mary Enuma, matron of Amaddin Orphanage home thanked the Commission for reaching out to the children. “I never expected that the EFCC will visit our home. We appreciate what you are doing and may the good Lord bless the Commission and its staff,” she said.

Also a quiz competition was organized in junction with a Non-Governmental organization, Faculty of Peace, among selected secondary school to test students knowledge and also educate them about EFCC and the effect of corruption in the society. At the end of the competition, Igbinovia Group of Schools emerged the winner with Imaguero College coming second and Idia College third.

Do Not Fight Me Okorocha Warns New Imo Government