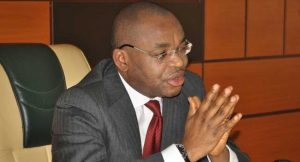 Reasons behind the freezing of the state government's bank accounts by the anti-graft agency are not yet known.

Meanwhile, the state commissioner for information, Charles Udoh, told Channels Television that the state government will comment on the development soon.

The report of the freezing of Akwa Ibom government accounts comes less than 24 hours after the commission froze some bank accounts of Benue government .

The freezing of Benue State Government's accounts has sparked criticisms by many including the Chairman of the Governors Forum, Abdul'aziz Yari, who described it as unconstitutional .

Yari, who is also the governor of Zamfara State, after a closed-door meeting with the Acting President, Yemi Osinbajo, in Abuja on Wednesday, told journalists that the move by the EFCC was wrong.

He added that Benue State has suffered a backdrop of security challenges which has claimed the lives of many. (Channels Tv)