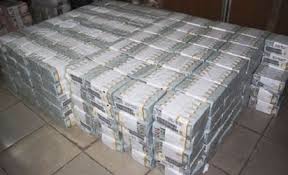 The Minister of Information and Culture, Alhaji Lai Mohammed, on Tuesday underscored some key achievements of  the Economic and Financial Crimes Commission, which he said had taken remarkable steps in the quest to rid nigeria of corruption.

Mohammed particularly pointed up the Whistle Blower Policy which according to him led to the recovery of  over N540 billion.

The Minister spoke  at the 71st General Assembly of the Broadcasting Organisations of Nigeria (BON) in Port Harcourt, Rivers State.

He was represented by the Director, Public Relations and Protocol, of the Federal Ministry of Information and Culture, Mr. Sunny Adejoh Baba,

“To this end, as at May this year, the Economic and Financial Crimes Commission (EFCC), through the Whistle Blower Policy, has recovered over N527 Billion, $53 million, and £122,890,” he said.

According to the minister,  the EFCC also successfully launched a major onslaught on the seeming high-and-mighty in the society (including senior military officer and their civilian accomplices), who had soiled their hands with shady deals, leading to the recovery of choice assets across the country.

Mohammaed therefore enjoined members of the fourth estate to join hands with the  Buhari Administration to ensure that the  the country was freed from the cancer of corruption.

Alhaji Mohammed, who said the BON General Assembly is taking place at an auspicious time in view of the forthcoming general elections, charged the broadcasting organisations not to yield their platforms to the purveyors of hate speech and fake news.

He said the broadcasting outfits should instead promote the unity, stability and the development of the country.

“Anything short of this would amount to a criminal abdication of a sacred duty which could spell doom for our collective national life. We have had enough sordid examples to learn from that we ought not to allow a repeat at this critical time of our national development.

“It is therefore of utmost importance that the media and specifically, broadcast media, do not allow itself to become a purveyor of fake news and hate speeches,” the Minister said.

He restated the Federal Government’s commitment to allowing the press to carry out its assigned watchdog roles, even as government expects the press to be guided by national interest above every other interests.

He noted that the changing media landscape and the advent of digital technologies have fundamentally altered the nature and function of media in the society, at times circumventing traditional media and challenging its privileged role as gate-keeper of news and entertainment.

The Minister therefore urged companies in the broadcasting value-chain to take the advantage of the market and build local stations that would not only create employment for a diverse segment of the population, but would also lead to a transfer of technology and free the creative dexterity of the young population.