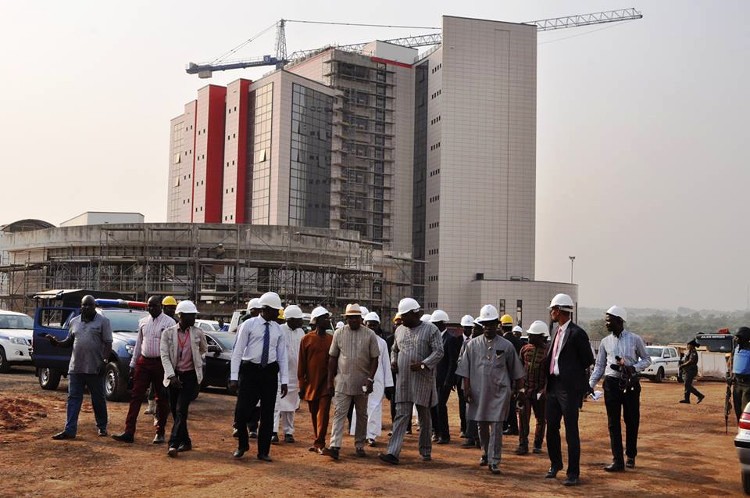 A prominent civil Rights organization- HUMAN RIGHTS WRITERS ASSOCIATION OF NIGERIA (HURIWA) is not particularly pleased that the agency of government clothed with the powers of combating Economic and Financial Crimes has gone to build for itself an expensively exotic office officially valued at over N20 billion at a time of post- Economic recession.

HURIWA said it was economically unwise for the EFCC to go shopping for such an expensive office when the government could have donated one of the thousands of housing assets forfeited finally through legal process by convicted politically exposed persons for use as the permanent head office of the Economic and Financial Crimes Commission (EFCC).

HURIWA has also condemned the National Assembly and the Presidency for authorizing the erection of such a gigantic edifice for just one commission at a time that over 100 million Nigerian families are struggling to find two quality square meals daily even as corruption and Economic crimes continue to constitute a cog in the wheel of the Economic transformation of Nigeria.

HUMAN RIGHTS WRITERS ASSOCIATION OF NIGERIA (HURIWA) which regards the huge expenses incurred to build the new office of just one agency of government as ostentatious and economically suicidal, posited that a Country that is battling to fix the broken down political system that has created the total lack of accountability and transparency which resulted in the theft and diversion from the public till of over $500 billion of Nigeria's crude oil wealth into private pockets could have continued to operate in the good enough facilities that originally houses the Economic and Financial Crimes Commission in Wuse two in the Federal Capital Territory of Nigeria or one of the forfeited houses from convicted theives of public fund converted into a permanent office for the anti graft agency.

Besides, HURIWA stated that there was no rational Economic or policy reason for the anti-graft body to abandon its present abode only because the Economic and Financial Crimes Commission (EFCC) has found some reasons unknown to the impoverished citizenry to move into its N24 billion headquarters next month.

In a media statement by its National Coordinator Comrade Emmanuel Onwubiko and the National Media Affairs Director Miss Zainab Yusuf, HURIWA quoted the Acting Chairman Ibrahim Magu as stating thus: “I am excited that the headquarters is ready for use. The Federal Government has spent over N24 billion to build it. I will crosscheck to give you the exact figure. I thank Mr. President for according this project a priority. It is part of his commitment to the anti-graft war. This is a legacy project, which many generations will be proud of. No leader in Africa has provided such a conducive environment for an anti-corruption agency like President Buhari has done.We have also received support from ministers and MDAs on release of funds and necessary infrastructure.”

HURIWA recalled that Magu further stated that “This commission is grateful to the National Assembly for its interest in the project. Speaker Yakubu Dogara, Deputy Senate President Ike Ekweremadu, chairmen and members of committees on Anti-corruption always visited the site to monitor the work.It shows that if we are determined, we can be on the same page on this war against corruption. It is not a personal thing. We is hosting heads of anti-graft agencies in the Commonwealth (Africa chapter) in May and we are hopeful the headquarters will be ready for occupation because it is more than 95 per cent completed. We are expecting Vice President Yemi Osinbajo to inspect the facility any time from now.”

HURIWA however said the new expensive edifice was just another white elephant project and a money guzzler which could have been avoided or at best converted to a general hospital and maternity for Nigerian Women so the EFCC is not allowed to degenerate to a multi billion blue chip entity instead of a law enforcement agency that the law created it to be.

The Rights group also queried what the EFCC with not too much of staff strength will be doing in such an imposing and air conditioned mansion when in actual fact the real job of anti-corruption crusade is a field work. “This acquisition of grandiose and expensive housing assets for one of the anti-graft bodies is surely an exercise in ostentatious show of wealth which could have been avoided”.