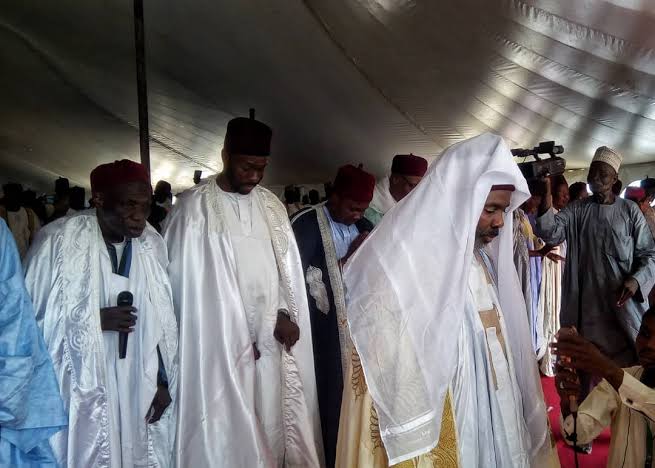 The Governor was accompanied by the immediate past Governor of Borno State, Senator Kashim Shettima, Speaker , Borno State House of Assembly, Hon. Abdulkarim Lawan, members of the state and national assembly, permanent secretaries, former and newly appointed state commissioners and politicians among others.

The two raka’ats session was led by the Imam Eidainee of Borno, Imam Shetima Mamman Shettima Saleh where prayers were offered for peace to reign in the state.

The Imam also called for unity and rbotherhood among the people, show of love, passion, concern, care and affection to each other by being our brothers keepers

Meanwhile, Governor
Zulum called on the Borno citizens during the Eid el Kabir Sallah festival to continue to pray for the people, leaders, and Security operatives who have been making sacrifices for Borno

Professor Umara Zulum further urged citizens of the state and all Nigerians, to dedicate themselves during the sallah period and use its spirituality to remember and pray for the soldiers, other armed forces, the Civilian JTF, hunters and vigilante groups who despite the festivities, are currently in front lines, making sacrifices in fighting boko haram insurgents on ground and through air operations, particularly in northern Borno, in continued determination to fully regain peace.

Zulum made the call in his sallah message made public by the Special Adviser on Public Relations and Strategy, Malam Isa Gusau Sunday.

“With the Eid-IL-Kabir being about faith and sacrifices in obedience to Allah, citizens should without loosing focus on spiritual essence, also reflect very deeply, that even as we all plan to gather in exciting congregations, share moments with our loved ones, exchange visits and gifts with families and friends, there are soldiers, policemen, other armed forces in the para-military and the DSS, volunteers from the Civilian JTF, hunters and vigilantes who are in war fronts, sacrificing their safety, sacrificing proximity to their loved ones, sacrificing all the sallah excitements mainly to ensure that those of us who are celebrate the festivities do so in an atmosphere of sustained peace. As we celebrate the moments, we all owe these patriotic soldiers, other armed forces and volunteers some portions of our time to remember and pray that Allah keeps all of them safe and make them consistently victorious over the Boko Haram insurgents. Beside prayers, I appeal to citizens to share whatever they can with families of fallen soldiers, policemen, civilian JTF, hunters and vigilantes within their reach in recognition and appreciation of the sacrifices made by their bread winners in Borno’s desperate search for peace” Professor Zulum said, as quoted by his spokesman.

The Governor also urged citizens to also remember that there are thousands of fellow brothers and sisters, who will be celebrating the sallah outside their communities as a result of displacement.

“Thousands of orphans, very old and weak men and women‎ will be celebrating the sallah as displaced persons in government camps within Nigeria and as refugees in republics of Niger, Cameroon and Chad. We owe them prayers for return of permanent peace and restoration of livelihoods in their communities so that insha’Allah, this will be their last sallah as IDPs and refugees. Aside prayers, we owe them support. I appeal to citizens to extend support to displaced persons within their reach” the Governor said.

Professor Zulum urged all citizens to go about sallah festivities peacefully, assuring that security formations are fully prepared to continually do everything humanly possible to guarantee public safety.