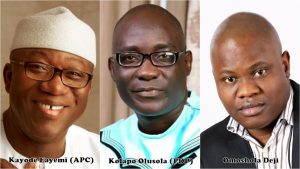 Coalition of observer groups and Civil Society Organisations that observed and monitored the Saturday July 14 th Governorship elections in Ekiti State have condemned the announcement of the All Progressives Congress APC candidate John Kayode Fayemi as the winner of the elections.

In a press statement, the group said the election does not reflect what they saw on ground and its will open up on th e true findings coming Wednesday 18 th July 2018 with details of the malpractices that greeted the election.

The Coalition in a press statement signed by its contact persons Comrade Haruna Farouk and Nze Adachi Okoro said it was regrettable that the Independent national Electoral Commission as well as the security agencies could be used to short change the people of the state the way they did on the day of the election.

The Coalition said it has gathered evidence that will show how the election was massively rigged describing the situation as a sad moment for democracy in the country.

“ We have evidences of election malpractices where a particular party in connivance with security personnel went about inducing electorates with cash and coercing them to snap the ballot papers in order to receive cash gifts from the agents of the party in question.

“The level of intimidation that occurred during the elections on Saturday was disheartening and shouldn’t' be allowed to stand in modern day Nigeria . We witnessed a situation where loyalists of the Peoples Democratic Party PDP and its agents were harassed and intimidated so as to make it difficult for them to participate in the elections.

“ Other incidence that we recorded will be made open in our findings which will definitely shock Nigerians and expose the conspiracy of INEC , Security agents and the APC to deprive the people of Ekiti from expressing their constitutional rights.”

The Coalition called on the international community to condemn what it called the 'political terrorism' that took place against the people of Ekiti state on Saturday stressing that their voice against the actions of the Federal Government, INEC and Security agents will help put pressure on the government to do the right thing.

PDP, Atiku to tribunal: We have built iron-cast case for Buhari to be sacked