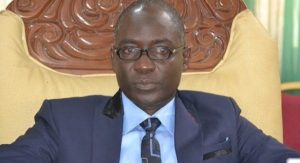 The Peoples Democratic Party, PDP, has elected Professor Kolapo Olusola Eleka as its flagbearer for the Ekiti governorship election which comes up in July.

Professor Eleka who is the deputy governor of Ekiti State emerged the candidate of the party having secured the highest number of votes in the primary which was held on Tuesday.

The election has 2085 registered and accredited delegates but 1968 votes were recorded.

Seven votes were voided.
In his reaction to the outcome of the election, Director General, Kolapo Olusola Campaign Organisation, Bisi Kolawole said: “It's one of the best primaries ever conducted in the history of the state.

“We can only hope such free and fair election is replicated in Osun and the country in general. Peoples Democratic Party has made history again especially a few days after APC primaries fallout.

“It's an indication that we are true democrat.”

He however said, “everyone will close ranks and work together just as claimed earlier by the deputy governor to salvage the state from the hands of APC.”