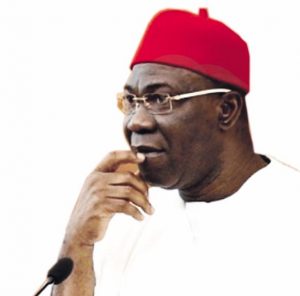 Deputy Senate President Ike Ekweremadu yesterday threatened to release video clips of how his house was invaded by alleged assassins on Tuesday.

Ekweremadu said he may be forced to actualise his threat to release the video clip, if the Police fail to withdraw its claim that what happened in his house was a mere case of burglary.

The Senate resolved to ask the police to do a thorough investigation of the alleged assassination attempt on Ekweremadu, his wife and son in the early hours of Tuesday.

The upper chamber said the conclusion that the incident was a case of burglary appeared to be hasty.

Senator Enyinnaya Abaribe (Abia South), who raised the issue, prayed the Senate to condemn the hasty conclusion by the Police that the invasion of Ekweremadu’s residence was a mere burglary case.

Abaribe lamented that “for the police to quickly without interviewing the very person for whom this incident happened, to come out and determine that it was a burglary, actually burgles the mind. We know in this country that Bola Ige was killed in his home. We know and also it is a fact the former gubernatorial candidate, Funsho Williams was also killed in his home.

“Our fear today is why the police are engaging in a cover up? Why is the police continually at any time that it concerns people that do not have presidential oversight or cover, they quickly come out and have a report,” the senator queried.

Ekweremadu said a Deputy Inspector General of Police in charge of operations visited his house with the FCT Police Commissioner on Tuesday afternoon to sympathise with him.

“I showed them round and of course they were very sympathetic of what happened.”

He also informed the Senate that he was shocked when he woke up yesterday morning to hear police saying that what happened in his house was “a mere case of burglary”.

Ekweremadu said: “I am at a loss because as we speak, they have not taken any statement from my son, who was hospitalised; they have not gone to the hospital to find out what exactly happened to my son. They have invited security personnel attached to me, who reported yesterday. Some are still reporting this morning.

“They (the Police) looked at the CCTV tapes operated by the DSS and a staff of my house; apparently they were not able to figure it out. So, it was easy for them to quickly dismiss what really happened.”

He noted that he has been able to figure out the correct picture of what happened and added that he now has the video clip.

“Unfortunately for them, later yesterday evening, a technician came and was able to figure out and was able to produce the CCTV footage, including how they gained entrance into my house and how they got a way into my room and the fight between them, my wife and my son and all the efforts we made to save our lives. I am happy that we have that in our custody, which the police is not aware of.

He added: “I may now be forced to release those footage to the media, international communities so that Nigerians and ordinary people will judge whether it was a case of burglary or attempt to kill me or whether they just want to come to my house to have a breakfast or have a handshake with me.”

The House of Representatives also yesterday resolved to constitute an ad hoc Committee to investigate the alleged assassination attempt  on Deputy  Senate President Ike Ekweremadu and members of his family.

The committee is also mandated to find out the circumstances surrounding the late response of the Police to the emergency.

The committee is to report back to the House in two weeks for further legislative action.

The chamber also urged the relevant security agencies to ensure increased security surveillance around the Deputy Senate President as well as other members of the National Assembly. NATION