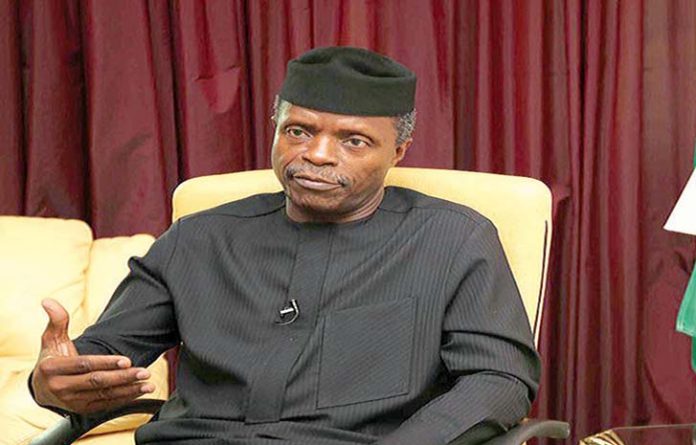 Vice President Yemi Osinbajo has admitted that corruption still thrives in the corridors of power, even under the administration of President Muhammadu Buhari.

He conceded that even though the Buhari administration was fighting tooth and nail to checkmate it, the battle was still far from being won.

Osinbajo, however, said the level of corruption that existed during ex-President Goodluck Jonathana��s administration was unprecedented when compared to the current level.

He alleged that under Jonathana��s government few individuals came together to share over N150 billion just two weeks before the 2015 general elections.

He said they initiated all kinds of dubious contracts to siphon money, indirectly fleecing the country of funds that could have been channelled into projects for the citizens.

The VP made these allegations when he spoke at the 7th Presidential Quarterly Business Forum for Private Sector stakeholders at State House Conference Centre (the old Banquet Hall), Presidential Villa, Abuja.

According to the vice president, the Nigerian business environment is still burdened with corruption, a development which, he noted, was still stagnating the economy to date.

The number two citizen also alleged that about $3 million, approximately one-tenth of our foreign reserves, was fleeced through a strategic alliance programme with the Nigerian National Petroleum Corporation (NNPC).

a�?There are several issues many of which have already been articulated, but I want to talk about what I think is the biggest problem which, for some reasons, we hardly talk about when discussing our national economy.

a�?There is grand corruption in the public finance space. Sometimes the way we talk about the Nigerian economy, it does appear as if it is the economy of say Norway or somewhere where all things are equal.

a�?If the president is corrupt, the entire financial system is compromised and that is what we have seen with the figures we have just seen. It is absolutely important that we take this into account.

a�?I am not saying that corruption under this administration has been completely dealt with; no, certainly not.

a�?Where corruption has become systematic such as we have in our country today, you cannot deal with it in one full fell swoop, it is not possible.

a�?In any event, you still have a lot of corruption fighting back. The system fights back and ita��s both an internal and external fight back, and you have to be steadfast and strategic to win the battle.

a�?Therea��s no way that youa��ll have a system such as ours that has consistently thrived on corruption and proceeds of corruption and public financing, in particular, that will give up and say guys, the problem has been solved. No.

a�?It is a system that has fed on corruption and it affects all aspects of governance, so trying to deal with it is certainly not a walk in the park.

a�?But I want to say that that task has already begun and that task is being done consistently, and I believe that going forward in the next few years, no matter how we are criticised, if we stick to policy, especially controlling excesses and corruption in public finance, this country will make the kind of progress that it deserves to make with all the resources at our disposal.

a�?If we stick to the policy of ensuring that as far as public finance is concerned, there is no impunity and that we hold people to account, Ia��m absolutely confident that this country has what it really takes to make the kind of progress we deserve to make as a nation,a�? the VP stated.

He noted that through prudent resource management in the last two and half years, the Federal Government had been able to shore up capital spending by at least 400 percent.

He said such feat had largely been made possible because the country has a leader that abhorred corruption, something that distinguishes the Buhari government from that of Jonathan.

a�?I do not think that any consideration about our economic development can be properly and honestly done without fully analysing corruption, especially grand corruption in the public finance space.

a�?You see that despite record high levels of oil prices, very little was invested in infrastructure and a record level of leakages were recorded in the past few years.

a�?This is the fundamental issue in our economy. Corruption affects everything.

a�?It is so fundamental that we cana��t even think of our economy without thinking of what to do about it.

a�?Sometimes when we talk about our economy, we talk about the fact that we have relied on a single commodity and that is one of the reasons why we are where we are.

a�?Yes, thata��s quite true but the fact is that proceeds from that single commodity was regularly hijacked consistently by a few.

a�?That is really the problem. If we had spent the proceeds from that single commodity the way we ought to, we wona��t be where we are today.

a�?Most of the proceeds went to rent seekers in the industry and production.

a�?For example, I am sure many of us are familiar with the so-called Strategic Alliance Contract with the NNPC and NDDC, the promoters of the companies made away with close to $3 billion, almost a tenth of our reserves.

a�?There is no way, if someone made away with a tenth of your reserves, that you will not have a major economic shock.

a�?And if we dona��t deal with it, if we dona��t talk about it, how will we be able to discuss our economy in a real honest way with a view to ensuring that these things do not happen again.

a�?When you consider that in 2014, as the minister of finance has said, that oil price was an average of $110 a barrel and only N99 billion was spent on power, works and housing and when we talk about the economy, we talk as if these are normal by every standard.

a�?Nobody should talk about the economy when you have this kind of huge leakages and huge corruption.

a�?Corruption that completely makes even what you are allocating to capital projects are made nonsense of it.

a�?We saw from the presentation of minister of finance that N14 billion was spent on agriculture in 2014, transportation, N15 billion, so the total spent on infrastructure in those three years were N153 billion and in two weeks before the elections, N150 billion was essentially shared.

a�?So if you total infrastructure spending of N150 billion and you can share N153 billion, that is completely incredible. That sort of thing doesna��t happen anywhere else in the world.

a�?And when we are talking about the economy, we must simply understand that that is the problem.

a�?Today, with less revenue, we have increased capital funding by 400% as the minister has said, in power, works and housing, in defence, transportation, agriculture.

a�?If we want to do analysis in Nigeria, it is either fraudulent or ignorant if we do not bring money that belongs to corruption into the mass.

a�?This is what distinguishes in my own respectful view, this administration from the other. I can say that with what I have seen, if you have a president who is not corrupt, 50 percent of your financial problems are over.

a�?This is what I have seen, I can demonstrate it with facts and figures.a�?